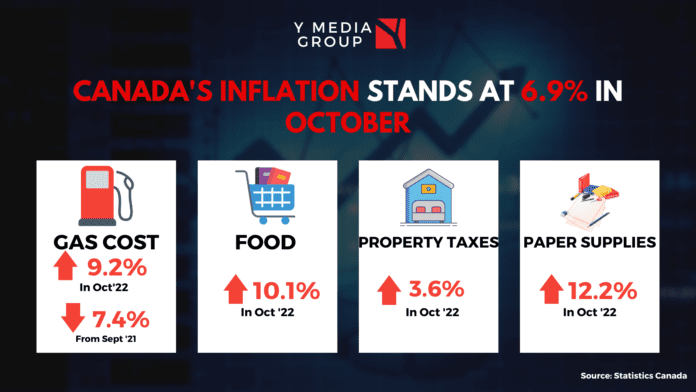 The Consumer Price Index (CPI) rose 6.9% year over year in October, matching the increase in September. Faster price growth for gas and mortgage interest costs were moderated by slowing price growth for food.

Excluding food and energy, prices rose 5.3% year over year in October, following a gain of 5.4% in September.

In October, higher prices at the gas pump put upward pressure on the all-items CPI. Additionally, Canadians renewed or initiated mortgages at higher interest rates, which led to acceleration in the Mortgage Interest Cost Index. Offsetting the upward pressure was slower price growth on a year-over-year basis for natural gas and groceries, particularly prices for fruit, vegetables, and meat.

In October, average hourly wages rose 5.6% on a year-over-year basis, meaning that, on average, prices rose faster than wages. Although Canadians experienced a decline in purchasing power, the gap was smaller than in September.

On a monthly basis, gasoline prices increased 9.2% in October following a decrease in September (-7.4%). The announcement of future oil production cuts by the Organization of the Petroleum Exporting Countries Plus and a weaker Canadian dollar contributed to higher gasoline prices for Canadian consumers.

Prices for some food commodities, such as dairy products (+10.6%) and eggs (+13.8%), increased year over year in October, mainly due to approved producer price increases from their respective governing boards.

Chart 4
Prices for food purchased from stores decelerated in some categories, but remain elevated in October

Spotlight on shelter in the Consumer Price Index

Putting a roof over your head, whether you own or rent a home, takes up the largest share of average spending for most Canadians. This is reflected in the Consumer Price Index (CPI), as shelter accounts for approximately 30% of the CPI basket weight in 2021. Prices for owned and rented accommodation including goods and services associated with maintaining and insuring your home, as well as utilities, are all included in the shelter index.

Owned accommodation, which accounts for 19% of spending in the CPI, is one of the most conceptually complex components for statistical agencies to measure. Currently, there are a few different methods recommended internationally, depending on the use of the CPI, the availability of data, and housing market characteristics. Some countries do not measure owned accommodation at all as part of their CPI or have a separate inflation series for this component.

The CPI is a robust indicator, guided by internationally recognized standards, that Canadians have come to rely on since 1914. As a measure of consumption, the CPI is designed to capture the monthly costs of owning a home rather than the cost of buying one. When a Canadian purchases an asset like a house, they are moving money from the debt to the asset side of their personal ledger. Because of this, what gets measured in the CPI are all the ongoing costs homeowners are paying to live in and maintain their home.

During the past few years, Canadians have sought out more living space and outdoor amenities in response to the COVID-19 pandemic. This change in preferences, coupled with historically low interest rates, and other factors linked to the pandemic, such as higher building costs, helped push the year-over-year rise in the cost of home ownership in Canada to a 32-year high in early 2022. Since April, some of these conditions have started to reverse, another trend reflected in the CPI.

The homeowners’ replacement cost index, which is related to the price of new homes, slowed in October (+6.9%) after increasing 7.7% in September. This index has decelerated, on a year-over-year basis, every month since May 2022 (+11.1%).

The higher interest rate environment has pushed up lending rates in the Mortgage Interest Cost Index. In October, mortgage interest costs increased on a year-over-year basis by 11.4%, the highest increase since February 1991 (+11.7%).

Property taxes and other special charges, which are priced annually in October, rose 3.6% on a year-over-year basis in October 2022, compared with a 1.5% increase in October 2021. Property taxes rose the most in British Columbia (+8.9%), mainly due to higher assessment values. Manitoba (-2.8%) was the only province to experience a decline, largely due to a reduction in the provincial education tax.

The easing of public health measures in 2022, combined with post-secondary schools returning to in-person teaching and rising immigration, have contributed to higher rent prices. In October, rent prices increased by 4.7% compared with October 2021, following a gain of 4.2% in September 2022. This marks the ninth consecutive month in which rent prices have increased at a rate above 4%.

Year over year, prices rose at a faster pace in October compared with September in eight provinces.

Fuel oil and other fuels

Atlantic Canadians paid more for fuel oil and other fuels than Canadians living in other provinces on a year-over-year basis, with prices rising at the fastest pace in Newfoundland and Labrador (+77.3%). Prices also increased in Nova Scotia (+67.8%), Prince Edward Island (+54.9%), and New Brunswick (+51.0%). Fuel oil is more commonly used for heating homes in Atlantic Canada, and as such, contribute more to price change in these provinces compared with others.

On a monthly basis, prices for natural gas declined in Alberta in October (-9.9%) compared with September (+3.1%). Among the provinces, only Albertans saw a month-over-month price decline.

Prices for gasoline in Alberta increased on a month-over-month basis in October (+17.1%) compared with September (-6.2%). The price increase was the largest monthly movement in Canada and is partially attributable to larger retail margins as well as a gradual re-introduction of the gasoline tax.