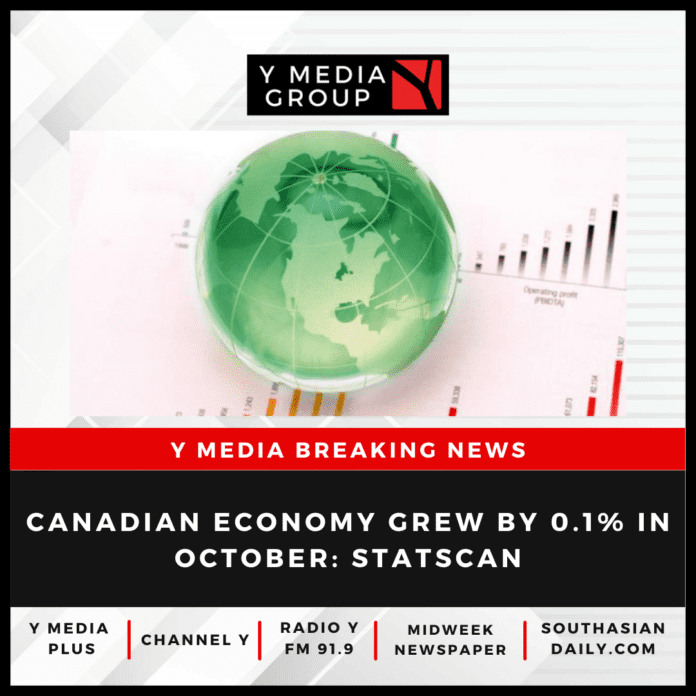 Advance information indicates that real GDP increased 0.1% in November. Increases in the utilities, wholesale, and finance and insurance sectors were partially offset by decreases in the construction, retail, and mining, quarrying, and oil and gas extraction sectors. Owing to its preliminary nature, these estimates will be updated on January 31, 2023 with the release of the official GDP data for November 2022.

Client-facing industries among the largest drivers of growth

Several client-facing sectors and subsectors such as air transportation, arts and entertainment and the accommodation and food services and drinking places sector expanded in October.

The arts, entertainment and recreation sector increased 2.2% in October, up for the ninth month in a row.

The increase in October was led by performing arts, spectator sports and related industries, and heritage institutions (+4.7%). Growth was driven by more games being played by the Toronto Blue Jays than usual in October, with two playoff Wild Card games in addition to three regular season games, which were postponed from April to October. Moreover, a late start to the National Hockey League pre-season in September contributed to a higher than usual increase in attendance in October.

Transportation and warehousing rose 0.8% in October, following a 0.4% growth in September, as 8 of 10 subsectors were up.

Rail transportation increased 1.8% in October, more than offsetting a decline in September. Growth in grain, wheat, canola and fertilizer carloadings were a major contributor to the gain. The increase in fertilizer carloadings was associated with a strong seasonal demand and limited global supply due to the impact of Russia’s invasion of Ukraine.

Wholesale trade grew 1.3% in October, up for only the second time in five months. Nevertheless, activity rebounded to the highest level since February 2022, with eight of nine subsectors recording gains.

Personal and household goods wholesaling (+1.7%) contributed the most to the growth in October. The gain was led by pharmaceuticals and pharmacy supplies as higher sales of pharmaceutical products reflected the recent availability and authorization of COVID-19 vaccine boosters targeting the Omicron subvariants.

The mining, quarrying and oil and gas extraction sector stepped back 1.6% in October.

Oil and gas extraction contracted 2.0% in October, led by a decrease in oil sands extraction.

Oil sands extraction decreased 3.9% in October, with lower synthetic oil production in Alberta contributing the most to the decrease. Production was interrupted by the commencement of scheduled maintenance activity at some synthetic crude upgraders in Alberta. Still production levels of crude bitumen remained elevated in October.

Mining and quarrying (except oil and gas) contracted 0.7% in October as a result of a decrease in metal ore mining.

Manufacturing weakens, as declines in both durable and non-durable goods industries were observed

The manufacturing sector contracted 0.7% in October, the fourth decline in six months and the lowest activity level since December 2021, on declines in both durable and non-durable goods manufacturing.

Durable-goods manufacturing declined 1.1%, more than offsetting a 0.9% increase in September, as 5 of 10 subsectors contracted in October. Declines in fabricated metal product manufacturing (-4.7%) and machinery manufacturing (-2.9%) contributed the most to the contraction.

Non-durable goods manufacturing edged down 0.1% in October, the third straight monthly decline, as five of nine subsectors contracted. Food manufacturing (-0.9%) drove most of the decrease as growth in grain and oilseed milling was more than offset by a drop in seafood product preparation and packaging manufacturing.