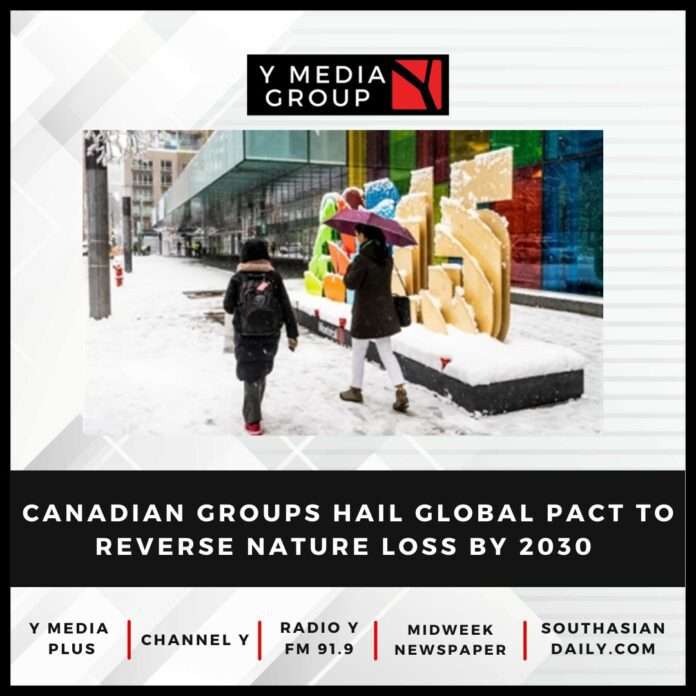 Canadian environmental groups have welcomed the Kunming-Montreal Agreement at COP15 in Montreal to halt and reverse global biodiversity loss by 2030 and applaud Canada’s leadership, which was instrumental in landing the deal.

This historic deal was adopted by 196 countries under the UN Convention on Biological Diversity, including Canada.

Under this agreement, governments have committed to conserving at least 30 per cent of land and of ocean globally, and respecting the rights of indigenous people and recognising contributions of indigenous and traditional territories towards this goal.

Governments have also committed to eliminating subsidies harmful to nature while increasing international finance for biodiversity conservation. Specifically, developed countries will contribute $20 billion a year until 2025, increasing to $30 billion a year until 2030, into international finance for developing countries to mobilise conservation efforts globally.

This win for people and the planet will need a whole-of-government and whole-of-society approach to achieve these ambitious goals. Governments at all levels, businesses and society must act together to halt and reverse biodiversity loss and address the climate crisis in the coming years to build on the momentum achieved at the UN biodiversity summit, referred to as COP15.

Environmental groups applaud Steven Guilbeault, Canada’s Minister of Environment and Climate Change, for his leadership at COP15 in landing an ambitious global deal and advancing conservation in Canada by committing to: A domestic strategy and action plan to halt and reverse nature loss in Canada that should include new legislation for accountability to biodiversity commitments.

More than $800 million in support of indigenous-led conservation, more than $600 million in new commitments for international biodiversity finance, more than $20 million of federal funding to expand conservation in the Yukon through the Canada-Yukon Nature Agreement and a joint feasibility assessment with First Nations and the province of Manitoba to establish the Seal River Watershed as an ‘Indigenous Protected Area’.

With merely eight years until 2030, it’s crucial Canada takes meaningful action now to support implementation of this deal at home.

Canada urgently needs this domestic action plan, including new legislation to hold all levels of government accountable while upholding the rights and jurisdiction of indigenous people and working in full partnership with them to protect nature.

Canadian environmental groups will work with all levels of government, indigenous people, and the private sector in Canada to translate the Kunming-Montreal Agreement into ambitious federal, provincial and territorial action to deliver on promises made in Montreal.

“We are encouraged by Canada’s leadership on the road to this historic global agreement to halt and reverse biodiversity loss by 2030 — a short eight years from now,” said Sandra Schwartz, National Executive Director, Canadian Parks and Wilderness Society (CPAWS).

“To do its part at home to meet targets and ensure a future for nature, Canada’s provinces and territories must work together with the federal government and indigenous governments to put in place concrete action plans to protect 30 per cent of land and ocean in Canada that will prioritise indigenous-led conservation and protect the most important ecosystems and vulnerable species through strong and effective conservation measures that respect indigenous rights.”

“This historic global deal provides hope that we can collectively halt the planet’s current path towards extinction in a way that centres indigenous rights and knowledge. Implementation of this agreement will be the crucial issue, and must start now. We commend Canada’s leadership in setting out ambition for a national action plan to halt and reverse nature loss here at home, with new legislation to ensure accountability,” added Gauri Sreenivasan, Director of Policy and Campaigns, Nature Canada.