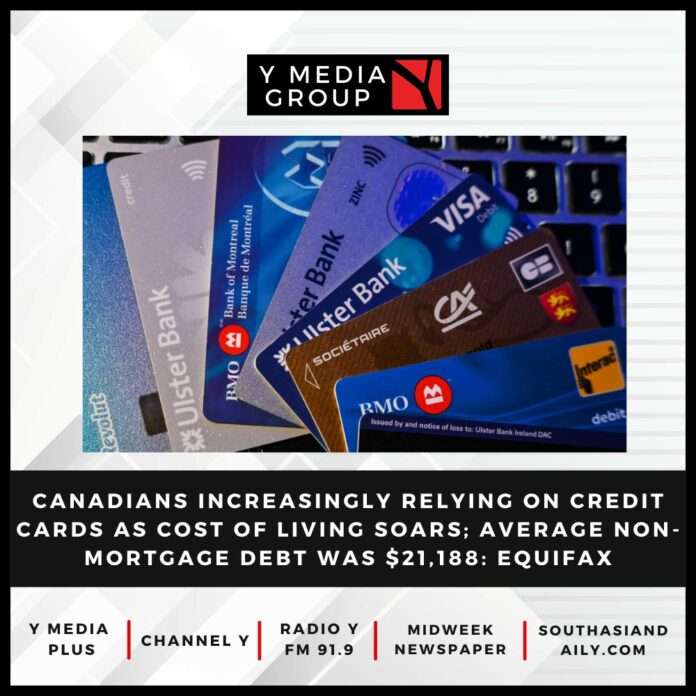 Canadians are feeling the squeeze trying to keep up with monthly bills, debt obligations, housing payments, and trying to save for retirement according to a recent consumer survey conducted by Equifax Canada in advance of November’s Financial Literacy Month.

Only half of Canadians (50 per cent) indicate that they feel comfortable about their personal economic outlook. This is down significantly since last year (61 per cent), indicating that many Canadians are concerned about the economy. Keeping up with paying month-to-month bills (e.g. rent, utilities, insurance) has 52 per cent of survey respondents concerned. Older adults aged 65+ are most likely to be concerned about bill payments (73 per cent), compared to younger adults aged 18-34 (40 per cent).

When asked to further reflect on their current financial situation, 53 per cent of Canadians surveyed said they have a lot of anxiety about their current level of personal debt. People in Atlantic Canada and British Columbia had the most anxiety about debt at 62 per cent and 60 per cent respectively, while Albertans were the lowest at 48 per cent. Quebecers led the way in concerns about job security at 49 per cent in contrast to Alberta again being the lowest at 27 per cent. Likewise, Quebecers were the most concerned about paying off debts (e.g. mortgages, student loans, medical expenses) at 46 per cent, while Albertans were the least concerned at only 29 per cent.

“No matter where they live in Canada and no matter how old they are, people are clearly concerned about their financial situation,” said Julie Kuzmic, Equifax Canada’s Senior Compliance Officer, Consumer Advocacy. “Credit card usage is reaching historic highs. This can be a slippery slope for some, as it doesn’t take long to find yourself burdened by debts, which may become challenging to pay back in this economic environment.”

Equifax Canada data indicates credit card utilization has increased for six consecutive quarters. The average credit card balance held by Canadians now stands at a record high of $2,121 at the end of September. The total average non-mortgage debt per consumer is $21,188, returning to levels not seen since Q1 2020.

CONCERNS IN THE GROCERY AISLE

Six-in-ten survey respondents (59 per cent) said they are using coupons and looking for deals more at grocery stores versus last year. Nearly as many (54 per cent) are cutting back on grocery shopping altogether. Women are more likely to be using coupons (63 per cent compared to 56 per cent of men). Likewise, women are more likely to be cutting back on grocery purchases (59 per cent versus 48 per cent of men).

When it comes to housing, one-in-five respondents (20 per cent) indicated they are not able to find a rental apartment they can afford in their preferred city or neighbourhood. Additionally, 17 per cent of respondents are contemplating moving to another part of the country to save on housing costs, and 14 per cent may need to move in with a family member for the same reason. Renters are more likely to be contemplating a move elsewhere (22 per cent), versus 15 per cent of homeowners.

“We’re pleased to see that the importance of checking your credit reports and credit scores seems to be gaining traction with Canadians,” said Kuzmic. “Having a better understanding of how credit reports and scores work can help people to navigate their financial decisions. While I always encourage people to regularly check their credit reports to make sure the information is up-to-date and correct, consumers can even sign up to receive timely alerts about key changes. That way they can better detect fraud and act quickly to protect themselves.”

“For people with credit scores lower than 750 out of 900, the next step should be to understand how to improve those scores over time,” continues Kuzmic. “Lenders generally consider anyone above 750 to be a lower risk to default on their payments. Small behaviour changes like paying bills on time every month can have a positive impact on credit scores.”