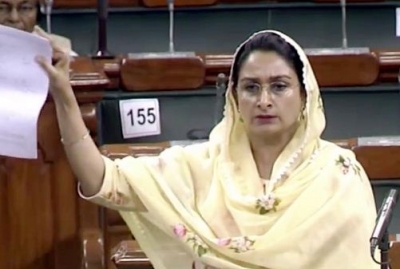 Bathinda MP Harsimrat Kaur Badal on Thursday said the NDA government had discriminated against Punjab by keeping its farmers, government and agricultural experts out of the committee on Minimum Support Price (MSP) and even changed the aim and intentions of the committee which would lead to further discontentment and strife.

Speaking in the Lok Sabha, the Bathinda MP protested against the manner in which representatives of Punjab, including its farm and government representatives and agricultural experts, had been kept out of the committee even though Punjabis had been in the forefront of the farmers’ agitation, which had forced the government to withdraw the farm laws.

Harsimrat also questioned how the aim of the committee had been changed even though the Central government had given a written assurance while withdrawing the farm laws that a forthcoming committee would legalise farmers’ right to the MSP.

“The committee formed on July 12, however, has removed this clause altogether and changed it to make MSP more effective and transparent.”

She also objected to the composition of the committee, saying the former Agricultural Secretary, who was the architect of the erstwhile black laws, had been made its Chairman and that a Member (Agriculture) of NITI Aayog who had resolutely defended the scrapped farm laws was also its member.

She said besides this all farmer representatives included in the committee were known supporters of the erstwhile black laws.

She also highlighted how agricultural experts had been included from Jammu and Jabalpur and representation had been given to governments of Karnataka, Orissa, Andhra Pradesh and Sikkim but Punjab had been ignored.

“This has been done despite the fact that Punjab has served as the granary of the country and has made the maximum contribution to the national food basket in the last seventy years.”

Later while speaking to the media, Harsimrat demanded the committee be reconstituted and expressed shock that Chief Minister Bhagwant Mann had not done anything to register Punjab’s strong protest at being left out of the committee.

She said while AAP MPs from Punjab had earlier followed their high command’s dictate and held ‘dharnas’ in Parliament protesting against the delay in giving permission to its convener and Delhi Chief Minister Arvind Kejriwal to visit Singapore, Congress MPs from Punjab were now protesting against questioning of party President Sonia Gandhi by the Enforcement Directorate.

“Both the AAP and Congress MPs have failed to protect the interests of Punjabis and voice their concerns in Parliament,” she added.