China wants military posts in Pakistan to safeguard its investments 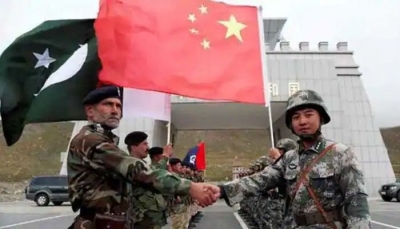 As part of its ambitious Belt and Road Initiative, China has made significant investments in the conflict-prone Pakistan-Afghanistan region.

China is planning to protect its interests in the two Asian countries by stationing its own forces in specially designed outposts, according to top diplomatic sources.

China has made significant investments in Pakistan and Afghanistan to further its goal of expanding its influence in the region.

China is a major source of financial, military and diplomatic support for Pakistan, and according to some estimates, the Chinese investments have exceeded $60 billion.

Given the huge imbalance of power in its favour, China started putting pressure on Pakistan to allow the construction of posts where it would station its armed personnel.

However, Afghanistan, where the Taliban is currently in power, still has to meet the expectations of China and Pakistan on many counts.

Top diplomatic and security officials in Islamabad, who requested anonymity for this report, are convinced that China’s People’s Liberation Army is working at a war scale to establish military posts in Pakistan and Afghanistan to support its operations and expansion of its Belt and Road Initiative.

Ambassador Rong has recently arrived in Pakistan and has not been there since the end of March 2022.

However, the meeting in which he demanded the creation of outposts for Chinese forces was perhaps the first formal meeting between Ambassador Rong with the new government and state representatives.

According to sources, the Chinese ambassador has continuously been insisting on the security of Chinese projects and safety of its citizens.

Apart from requesting the use of Gwadar International Airport for its fighter jets, China has already demanded security outposts in Gwadar.

Another top source revealed that the facility, which could be used for military purposes, will soon become operational as revealed from its fencing.

However, the issue has its own sensitive dimensions as the Pakistani people may not be comfortable with a heavy Chinese military presence in the country.

There are concerns that Pakistan is already mired in a debt-trap-like situation and that Chinese tactics could leave it no better than a colony.

Both China and Pakistan have different concerns regarding Afghanistan. Both Pakistan and China expected unwavering support from the landlocked nation after the Taliban’s takeover. However, this has not materialised fully.

Keeping Indians out of Afghanistan was one of the topmost priorities for Pakistan. But the Kandahar-based Taliban have not too much of a liking for Pakistan that would allow it to call the shots.

The Taliban have a strong desire for an independent foreign policy, including ties with India. Even Taliban Defence Minister Mullah Yakub has suggested military training in India.

However, this was not the only instance in which Pakistan expected the newly-elected Afghan government to comply with its demands.

Taliban and especially the groups affiliated to the Haqqanis were expected to facilitate the destruction of the Tehreek-e-Taliban Pakistan and hand over wanted militants to the Pakistani army.

It soon became clear that Haqqani would not comply. The reason being that the Kandaharis and some of the TTP leaders shared the same ancestral background. The Pakistan Army had no option but to engage in complex ceasefire talks with the TTP.

On one side, Pakistan is trapped in the debt-trap diplomacy of China, while on the other hand, the Chinese administration is constantly reminding them that they do not have trust in the Pakistani security apparatus.

Pakistan does not want to annoy China from whom it repeatedly takes financial aid. However, the acceptance of the demand would not only dent its global image further it could also lead to domestic complications, say sources who requested anonymity for this report due to their proximity to decision makers in the country.