Chorus for Rahul for Congress President but spotlight on Gehlot 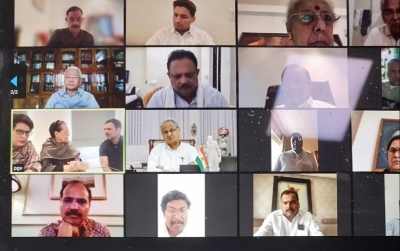 With the Congress on Sunday announcing the schedule for its Presidential elections, the anticipation over who will fill the post is mounting.

The Congress Working Committee – the party’s highest decision-making authority – on Sunday approved the schedule which envisages the election on October 17 and counting on October 19 in a meeting attended virtually by party chief Sonia Gandhi – who is abroad for a medical check-up, and her children Rahul Gandhi and Priyanka Gandhi, who are accompanying her.

G23 leader Anand Sharma, who had recently quit as the chief of a party panel for the upcoming Himachal Pradesh Assembly elections, also joined in virtually.

Many leaders were present at the AICC for the meeting while others joined through video links.

A section of Congress leaders say that Rahul Gandhi should take over as President, with Leader of Opposition in the Rajya Sabha Mallikarjun Kharge said that he is of personal opinion that that he should hold the post again.

However, Rahul Gandhi has made it clear that he wants a non-Gandhi to be party President, and the CWC meeting comes in wake of senior party leader Ghulam Nabi Azad quitting the party and hitting out at him over the party’s performance in last 8 years.

As sources indicated that Rajasthan Chief Minister Ashok Gehlot is top choice of Sonia Gandhi for the post, while asserting that Rahul Gandhi should take over as party workers want him, the situation will be clear when Sonia Gandhi comes back in the second week of September after her treatment.

Announcing the schedule after approval from the CWC, Congress Election Authority Chairman Madhusudan Mistry said that the date of issuance of notification is September 22, nominations can be filed from between 11 a.m. to 3 p.m. from September 24 to 30 while scrutiny will be done on October 1. Last date of withdrawal is October 8 and date of polling is from 10 a.m. to 4 p.m. on October 17 at all PCC headquarters.