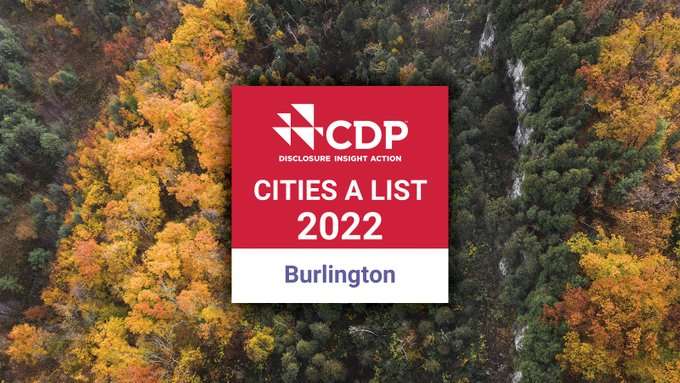 The City of Burlington is pleased to announce it has received an A grade for climate action efforts from the Climate Disclosure Project (CDP). This is the second year the City has reported on its climate action efforts to the CDP organization. The City received a B rating last year when it first started reporting. CDP is a non-profit charity and provides a global disclosure climate action reporting platform for companies and all levels of government. Burlington is one of 122 municipalities around the world to achieve an A grade, out of over 1,000 who participated in reporting this year.

The City submitted progress updates on the implementation of its climate related plans, including the community-based Climate Action Plan, the Corporate Energy and Emissions Management Plan (for City operations) and the recently completed Climate Resilient Burlington – A Plan for Adapting to Our Warmer, Wetter and Wilder Weather. CDP is recognizing the City for its reporting and efforts to reduce greenhouse gas emissions and adapt to a changing climate.

Allan Magi, City of Burlington, Executive Director of Environment, Infrastructure and Community Services, said, “Recognizing that the City and community are already being impacted by climate change, staff worked across the different departments and with community stakeholders to complete Climate Resilient Burlington – A Plan for Adapting to Our Warmer, Wetter and Wilder Weather. This plan along with our Climate Action Plan and Corporate Energy and Emissions Management Plan lay the groundwork for us to reduce greenhouse gas emissions and improve resiliency to the changing climate. Given this is just our second year reporting to CDP on our progress and ensuring our accountability and commitment to climate action, we are very happy to be recognized for our efforts. And it’s not just about the work that City Hall is doing but our collective efforts across the community.”

A List cities and counties are demonstrating climate leadership through collective action, just as national governments have been asked to at COP27. Council and City staff are happy to achieve the high rating on our second year of reporting, however, action on climate change is more urgent than ever to become a low carbon resilient community.

Reporting through the CDP platform helps the City to meet its reporting requirements for the Global Covenant of Mayors (GCoM), the largest global alliance for city climate leadership across the globe.

Katie Walsh, Head of Cities, States and Regions, CDP North America said, “Congratulations to Burlington for earning a spot on the CDP Cities A List — one of 49 cities and counties in North America to make the list in 2022. From mitigating carbon emissions in line with science, to building resilience against floods, drought and other climate hazards, to centering marginalized and vulnerable communities in their response, A List local governments are demonstrating best-practice environmental action. Burlington is in the vanguard of cities and counties leading the way toward a climate-safe future.”

About the Climate Disclosure Project

CDP is a global non-profit that runs the world’s environmental disclosure system for companies, cities, states and regions. Founded in 2000 and working with more than 680 investors with over $130 trillion in assets, CDP pioneered using capital markets and corporate procurement to motivate companies to disclose their environmental impacts, and to reduce greenhouse gas emissions, safeguard water resources and protect forests.

Nearly 20,000 organizations around the world disclosed data through CDP in 2022, including more than 18,700 companies worth 50% of global market capitalization, and more than 1,000 cities, states and regions. CDP is a founding member of the Science Based Targets initiative, We Mean Business Coalition, The Investor Agenda and the Net Zero Asset Managers initiative.