Congress To Stage Dharna In Front Of Ed Office On Monday, June 13 In Ahmedabad 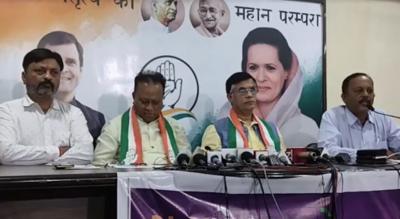 In protest of the Directorate of Enforcement (ED) summoning Congress president Sonia Gandhi and her son Rahul Gandhi to appear before it, Congress leaders and workers on Monday will stage Dharna in front of ED office in Ahmedabad.

Both the leaders have been issued summons in connection with the National Herald issue. Rahul Gandhi will appear before the ED officials on Monday.

Party’s national spokesperson Pawan Khera said, “National Herald was passing through financial crisis, so from 2002 to 2011, Congress party used Rs 90 crore fund for the payment of salaries of employees, retired employees, electricity bills, and taxes, which BJP and its associates and followers are terming it as an offence. Even the Election Commission has given it clean chit.”

Allegations against Sonia and Rahul Gandhi are baseless, ED action is nothing but political revenge by the ruling party. The paper was founded by Jawaharlal Nehru, Sardar Patel, Purshottam Tandon, Acharya Narendra Dave, and Rafi Mohammad Kidvai, it is a historical heritage and pride for the party and nation, and at any cost, the pride will never be compromised, the Congress said.

It is a fight of truth versus lie, Congress will stand with Rahul Gandhi, party national spokesperson is confident that the truth will prevail.

Party state unit president Jagdish Thakor said that on Monday party leaders and workers will protest before the ED office in Memnagar area at 10 a.m. He alleged that the ruling party believes that by targeting party’s national leaders, party cadre and workers will be demoralised, they are living in a fool’s world. Party workers will unitedly fight this injustice, he said.

He claimed the ruling party is targeting national leaders, because its internal survey says that this time it is nowhere close to the magic figure of 92 seats, it can hardly win 70 seats, this has shaken the party.

The Congress has always fought for truth and will continue to fight for truth, it is not going to bow down or surrender to the party that believes in taking revenge, said Thakor.