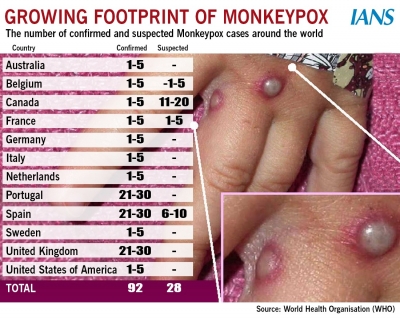 Even as the world is not over the pandemic yet, it is facing a significant and formidable challenge of the monkeypox outbreak that has so far infected over 100 people in about 15 countries, the World Health Organization (WHO) said.

Addressing the UN’s World Health Assembly in Geneva on Sunday, WHO Director-General Tedros Adhanom Ghebreyesus said the world is not over the pandemic, which has claimed six million lives, with almost 15 million excess mortality.

However, in addition is the new monkeypox virus and several other disease outbreaks such as acute hepatitis in children and Ebola, as well as wars in Ukraine and Yemen.

While the Covid pandemic is “most certainly not over. We face a formidable convergence of disease, drought, famine and war, fuelled by climate change, inequity and geopolitical rivalry”, Ghebreyesus said.

The global health agency confirmed that there are 92 confirmed cases of monkeypox around the world and another 28 suspected infections in 12 countries. Israel, Switzerland, Austria, Belgium are the latest addition to the list.

Further, the Democratic Republic of Congo has seen an outbreak of the deadly Ebola, while about 21 countries have reported at least 450 cases of a mysterious acute hepatitis condition among children.

About 12 children have lost their lives, and many required liver transplants.

Ghebreyesus said lowering guard on Covid virus is “at our peril” as “we still can’t predict its path, or its intensity”.

“Reported cases are increasing in almost 70 countries in all regions – and this in a world in which testing rates have plummeted. Declining testing and sequencing means we are blinding ourselves to the evolution of the virus,” the WHO chief said.

He noted that only 57 countries have vaccinated 70 per cent of their population, almost all of them high-income countries. He called for increasing vaccinations, genomic surveillance of the virus to fight the pandemic.

The global health agency chief stated that more than pandemics, war shakes and shatters the foundations on which previously stable societies stood; and creates the conditions for disease to spread.

Calling for “peace”, he said it is “a prerequisite for health”.