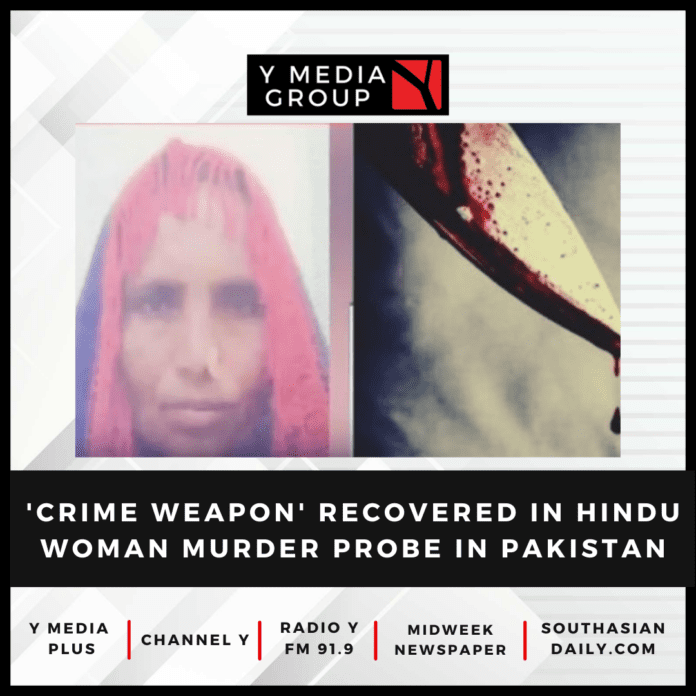 Police in Pakistan are said to have recovered the weapon believed to have been used in the alleged murder of a 40-year-old mother of five, Daya Bheel, a media outlet reported.

The widow was found dead with severed head and cuts on her sensitive organs. Her relatives had found the body dumped in mustard fields almost a kilometer away from her home in the Deputy Sahab village, 18 km from the Sindh’s Sanghar district office, during a search, mounted after she went missing while returning home on that day.

Initial probe has made police investigators to think over involvement of some sorcerers in the ghastly act, Dawn reported.

A police team from Pakistan’s Hyderabad was also said to be visiting Sanghar to collect samples of suspects for DNA examination.

The recovered weapon of offence – a sickle – would be sent to the Sindh health department’s laboratory for an examination to ascertain whether it was used in the woman’s murder. No one has so far owned the sickle, the media outlet reported.

A chaddar was also found lying at the scene of offence. The exact number of samples collected by the Hyderabad police could not be confirmed. The examination could make investigators know whether the sickle and chaddar had marks of sweating.

“The sorcerers are being questioned from time to time. Daya Bheel’s relatives claimed that her husband also died following a matter involving a sorcerer”, said a police official. He said no one was officially arrested but suspects were being grilled to seek their answers to important queries, the media outlet reported.

Their statements were being corroborated with the call data records (CDRs) of the phone used by the deceased and sorcerers. One of the sorcerers was identified as Roopo Bheel who, police believed, was in touch with her over mobile phone.

Addressing a briefing last week, India’s External Affairs Ministry spokesperson Arindam Bagchi said, “We have seen reports about it, but we don’t have specific details on the case, but we have reiterated that Pakistan should protect its minorities along with their safety, security and well-being, which is their responsibility.”

Krishna Kumari, Senator of Pakistan Peoples Party from Tharparkar Sindh, had confirmed the news of the brutal murder of the Hindu woman.

“Daya Bheel, 40-year-old widow brutally murdered and her body was found in very bad condition. Her head was separated from the body and the savages had removed the flesh from the whole head. Visited her village Police teams from Sinjhoro and Shahpurchakar also reached,” she had tweeted.

In light of reports of Daya Bheel’s tragic murder, Pakistani actor Ushna Shah has criticized the treatment of religious minorities in the country, Samaa TV reported.

The Bashar Momin actor took to her Twitter to express her displeasure with how Pakistani religious minorities are treated in the nation.

She wrote, “Daya Bheel, a Sindhi Hindu raped, murdered and decapitated in the most heinous manner yet barely any media outrage. Why aren’t we speaking about this.”

In a follow-up tweet, she said that a large number of minorities in Pakistan have no voice, just like late Daya Bheel.

Share
Facebook
Twitter
Pinterest
WhatsApp
Previous article
Any nuclear use attempt by N.Korea would result in Kim regime’s end: S.Korea
Next article
Russia waging war so Putin can stay in power ‘until the end of his life’: Zelensky