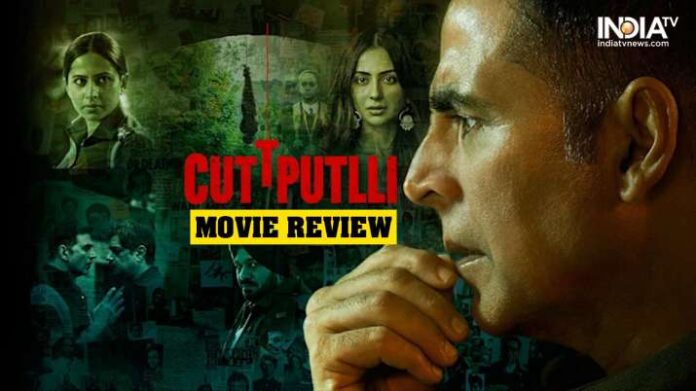 Cuttputlli Movie Review: Akshay Kumar dons the police officer’s uniform for his latest release Cuttputlli. The movie has premiered on Disney+Hotstar and attempts to reel in viewers with a slow-burn, serial killer on the loose storyline. Even though it has a promising premise, Cuttputlli is let down by Ranjit Tewari’s direction, who makes no effort in creating a sense of urgency that is a mainstay in this particular genre of films. Since no tension is built, Cuttputlli ends up being just a half-decent mystery thriller that relies too heavily on the lead actor’s presence to keep the viewers hooked.

Akshay plays the role of Arjan Sethi, who after failing to get a producer for his film script, takes up the job of a sub-inspector in Kasauli. Since he has spent years researching and trying to get into the psyche of a serial killer for his film, he puts to use the knowledge in solving a crime in the city where he is posted. Arjan is not taken seriously at first. His colleagues mock him, asking him to break out of his ‘filmy’ world. But when his intuition and research come in handy, he becomes the go-to guy for the serial killings in the quaint city. When his family becomes the victim, Arjan must give it his all to nab the culprit.

Cuttputlli has a simple storyline for us to tag along with and a huge potential for twists and turns for the viewers. Every character is part of the bigger puzzle and everything must come together by the end to deliver the perfect thrills. However, the movie does not play to its strengths. Akshay hops on the mystery ride portraying the self-doubting cop by underplaying the role perfectly. But halfway through, as the stakes rise and the story’s built-in potential needs to unload, he gets a bit too comfortable with the character and does not try to improvise. In one of the crucial scenes, he even goes into a zone of hamming with Chandrachur Singh, who plays his brother-in-law. This particular instance sticks out like a sore thumb in the film.

Director Ranjit Tewari, despite setting the atmosphere for a thriller well initially, loses grip over the narrative. When a sense of urgency is most required, the movie verges on the ordinary. This does not let the viewers invest in the characters during the peak points. Similarly, the emotional quotient is also missing when the police procedure turns into a family trauma. The revelation of the serial killer’s identity also appears to be rushed. The investigation portions are too one-sided and the cat-and-mouse chase only comes towards the end.

Interestingly, Cuttputlli is a remake of the 2018 Tamil thriller Ratsasan that had everything going for it that is off in the Bollywood version. In comparison, the original scores way above Akshay’s half-decent attempt at creating an intriguing thriller. The genre is ripe for the taking, but somehow, Bollywood has more misses than hits. And Cuttputlli too is a letdown.