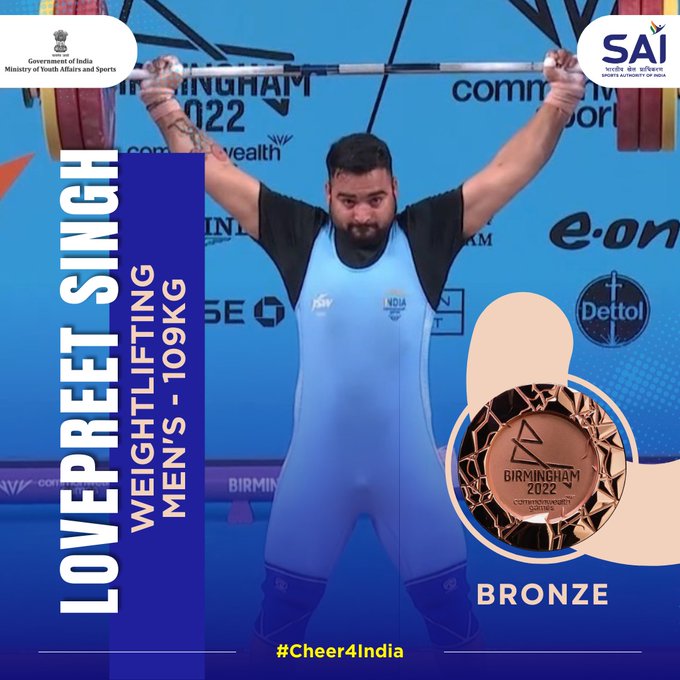 The 24-year-old Lovepreet Singh lifted 163 in snatch and added 192kg in clean and jerk for a combined total of 355 kg, which put him behind Junior Periclex Ngadja Nyabeyeu of Cameroon, who had a total of 361 and Jack Hittila Opeloge of Samoa who had a total of 358. He was a bit lucky as Australia’s Jackson George Roberts-Young failed to lift 150 kg in snatch in two attempts. He also failed in a desperate last-ditch attempt to lift 211 kgs in clean and jerk to try and overhaul Lovepreet.

This was India’s ninth medal from the Weightlifting at Birmingham and the 14th medal overall, five gold, five silver, and four bronze.

“I am very happy to win this medal as not many heavyweight weightlifters have won international medals for India. It is my best effort at the international competition and I am happy with this effort,” said Lovepreet Singh.

Though he had a clean series of lifts and succeeded in all six attempts, Lovepreet was totally conservative in his approach and worked with the aim of securing a bronze medal. He said that he had lifted 165 kg in snatch and 195 in clean and jerk during training at a camp in Birmingham a few weeks before the games and only did he attempt to lift 190 in a competition before and failed.

Indians normally do well in lower weight categories in weightlifting, boxing and wrestling with very little success in heavyweight and super heavyweight divisions.

That could be the reason why coaches Vijay Sharma & Co. decided to play safe and did not get Lovepreet to attempt 165 kg in snatch, which could have even had him pushing for the silver medal with 195 in final attempts.

Lovepreet started with 157 in snatch and cleared 161 and 163 in his next two attempts, which kept him in joint second position going into the clean and jerk. The lifter from Cameroon, who had 160 after snatch, started clean and jerk with 196 and then lifted 201. He failed at 205 kg in his third attempt.

Lovepreet started with 185, picked 189 in his second attempt and then upped it to 192 in his third attempt. Australia’s Roberts-Young 202 in his second attempt but failed at 211. A better snatch effort would clearly put him in contention for a medal but that was not to be and Lovepreet, who has won silver in Commonwealth Senior Championships in 2021 and gold in junior, claimed his maiden Commonwealth Games medal.