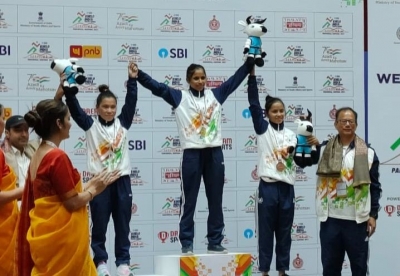 Daughter of a tea stall vendor, Kajol Sargar’s only connection with sport until three years ago was her daily visits to a local gymnasium to watch her elder brother Sanket train as a weightlifter.

The 16-year-old from Sangli in Maharashtra also watched in awe as he steadily rose up the ranks to become one of India’s top lifters; but that didn’t inspire her enough to take up the sport.

All that changed in 2019, when she saw Rupa Hangandi, also from Sangli, clinching the gold medal in the Khelo India Youth Games in Pune.

“My brother is more than five years older than me. I never really talked sport with him before,” Kajol Sargar said after becoming the first gold medallist in the Khelo India Youth Games 2021 here on Sunday.

“It was only after learning about Rupa Hangandi’s success in the Khelo India Youth Games that I felt that I should also try weightlifting,” she revealed.

Kajol, who now trains under Mayur Sinhasane, lifted a total of 113 kg in the women’s 40kg category to kick-off Maharashtra’s march towards the top of the medal’s tally.
Kajol only managed 50kg in snatch in her third attempt to fall behind Assam’s Rekhamoni Gogoi, who lifted two kilograms more going into clean and jerk.

Kajol had won a bronze medal in the Youth Nationals in August 2021 in Patiala but a wrist injury earlier this year forced her to rework her targets for the year.

“I was trying to lift 70kg during training and got hurt. I was out of action for over two months and even missed out on the Nationals in Bhubaneswar in March. This title is an important milestone in my three-year journey and would inspire me to work harder,” she added.