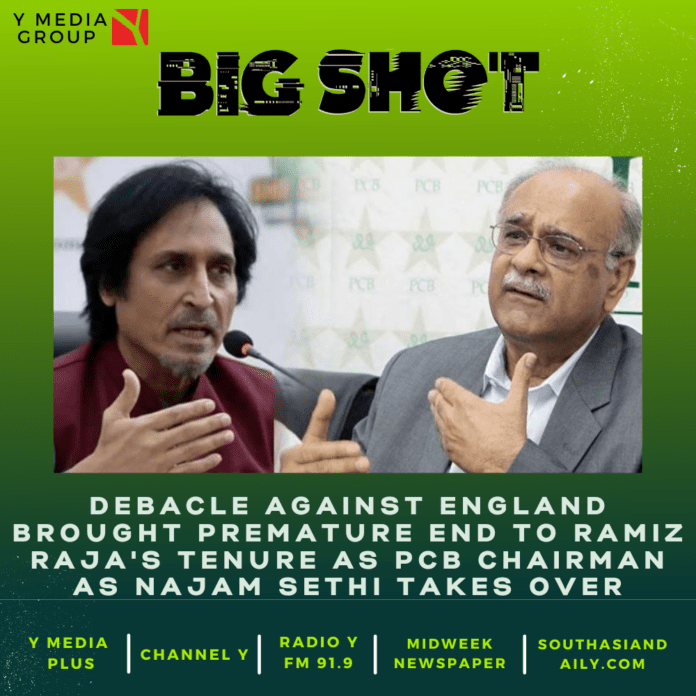 Pakistan’s embarrassing 3-0 debacle against England at home in the recent Test series seems to be the immediate trigger for the government to act and dethrone former cricketer Ramiz Raja as Chairman of Pakistan Cricket Board (PCB) and hand over the reins to veteran diplomat and his predecessor Najam Sethi.

England stormed to a historic clean sweep in Pakistan already clinched the three-match Test series after winning the first two matches. The third Test is currently going on in Karachi. This brought about a premature end to his three-year tenure.

According to reports in the local media, Pakistan Prime Minster Shehbaz Sherif, also the board’s patron, appointed Sethi as the new chairman of the PCB. The PCB’s constitution permits the Prime Minister to nominate candidates for the post of chairman.

Raja took over the role in September 2021 and during his brief stint, Pakistan played two T20 World Cups and a 50-over Women’s World Cup. It was under his stewardship that Pakistan hosted England and Australia and toured New Zealand, Sri Lanka, West Indies and Zimbabwe — losing to England and Australia and winning against Bangladesh and Zimbabwe. the series with West Indies and Sri Lanka was drawn.

Sethi, an experienced campaigner in PCB politics, had to resign as PCB chairman when former cricketer Imran Khan was elected as the Prime Minister of Pakistan in 2018.

Sethi shared the development through his official Twitter handle, in which he claimed that Raja is no longer the PCB chief and that the 2014 constitution of ‘he nation’s board has been restored as well.

“The cricket regime headed by Ramiz Raja @iramizraja is no more. The 2014 PCB constitution stands restored. The Management Committee will work tirelessly to revive first-class cricket. Thousands of cricketers will be employed again. The famine in cricket will come to an end,” tweeted Sethi.

Besides the debacle against England and Australia, Ramiz Raja faced criticism over his run-ins with trolls on social media regarding his comments on boycotting the ODI World Cup in India in 2023. He was brutally trolled for some of his other comments on social media. His handling of affairs also came in for criticism and his detractors upped the ante by meeting government officials to get him out of PCB.

Besides giving Ramiz Raja his marching orders, the Pakistan government also restored the old constitution of PCB and also put in place a 14-member panel to manage PCB and advise Sethi.