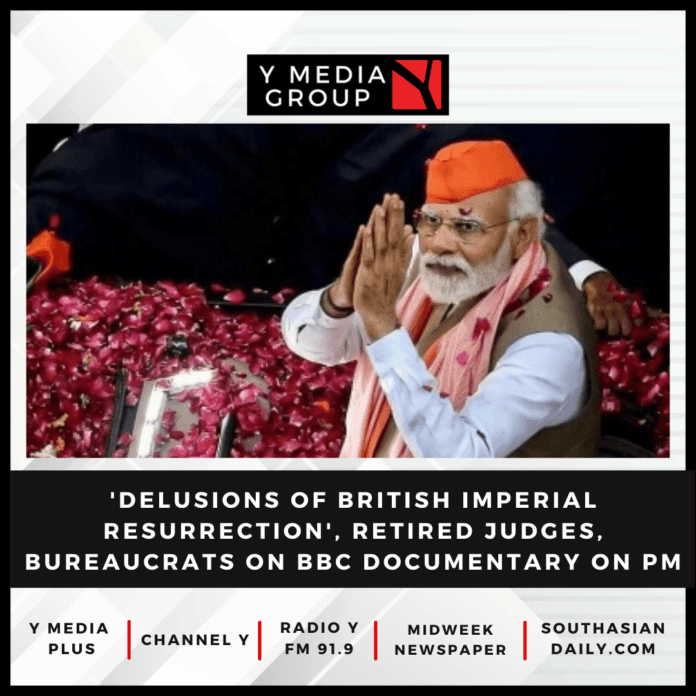 “Not this time. Not with our leader. Not with India. Never on our watch!” read the letter.

“Yet again, the staple, dyed-in-the-wool negativity and unrelenting prejudice of the BBC toward India has resurfaced as a documentary, ‘India: The Modi Question’. This production, the BBC claims, has been ‘rigorously researched according to the highest editorial standards’, and ‘examines the tensions between India’s Hindu majority and Muslim minority and explores the politics of India’s PM Narendra Modi in relation to those tensions’ and ‘a series of controversial policies implemented by him’,” it said.

“So now we have the archetype of British past imperialism in India setting itself up as both judge and jury, to resurrect Hindu-Muslim tensions that were overwhelmingly the creation of the British Raj policy of divide and rule. Not only is the BBC series, judging from what we have seen of it so far, based on delusional and evidently lopsided reporting, it presumes to question the very basis of the 75-year-old edifice of India’s existence as an independent, democratic nation, a nation which functions according to the will of the people of India. Glaring factual errors apart, the series – which uses the words ‘allegedly’ and ‘reportedly’ repeatedly, (not ‘factually’) – reeks of motivated distortion that is as mind-numbingly unsubstantiated as it is nefarious,” it added.

They also said that the Supreme Court had upheld the closure report filed by the top court-appointed Special Investigation Team (SIT) after years of painstaking investigation into the Gujarat riots.

“So now we have a British media organisation, the BBC, which naturally thrives on sensationalism regardless of how false its basis, setting itself up to second guess and dismiss the verdict of the apex of the Indian judiciary, the Supreme Court. This alone exposes the BBC’s malafides, and leads one to question the motivations behind this series,” said the letter.

“Instead of making a documentary titled ‘India: The Modi Question’, the BBC should begin by questioning its own bias against Prime Minister Modi (yes, their own too) and make a documentary called ‘BBC: The Ethical Question’,” the letter said.

The letter also urged people to sign the petition.

“Join us by signing this petition in the fight against BBC’s series. We start it here and we end it here by demonstrating, through our overwhelming ‘Satyagraha’, our true might: our patriotism,” the letter concluded.