Despite Russia’s Invasion Of Ukraine, US Remains Focussed On China, Says Blinken 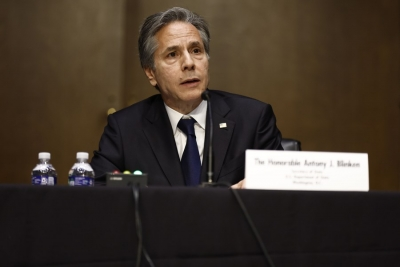 US Secretary of State Antony Blinken said on Thursday that while the ongoing Russian invasion of Ukraine was an immediate threat to the international order, the US remained focussed on China because the latter posed the most serious and long-term challenge.

Laying out the Biden administration’s long awaited China policy, Secretary Blinken said Beijing had been undermining the very international rules, laws and institutions that enabled its emergence and rise and that under President Xi Jinping, the ruling Chinese Communist Party had become more repressive at home and more aggressive abroad.

“Russian President Vladimir Putin poses a clear and present threat and attacking Ukraine three months ago he also attacked the principles of sovereignty and territorial integrity enshrined in the UN Charter to protect all countries from being conquered or coerced,” the secretary of state said and went on detail the military and diplomatic reverses suffered by Russia.

But, he added, “even as President Putin’s war continues, we will remain focused on the most serious, long term challenge to the international order. And that’s posed by the People’s Republic of China. China’s the only country with both the intent to reshape the international order, and increasingly, the economic, diplomatic, military and technological power to do it”.

The United States is not seeking conflict or a new cold war and it also does not want to block China’s rise as a global political or economic power, the top US diplomat made clear. But citing Xi-led China’s repressive measures at home and aggressive behavior abroad and its “no limits” pact with Putin’s Russia just before the Ukraine invasion, Blinken said Beijing cannot be relied upon to change this “trajectory” on its own. The US will, therefore, “shape the strategic environment around Beijing to advance our vision for an open, inclusive international system”, he added.

The Biden administration’s China policy will stand on three pillars of “invest, align and compete”, Blinken said. The US will invest to restore America’s leadership in invention and innovation, work with its network of allies in the Indo-Pacific and around the world and compete with China.

“We will invest in the foundations of our strength here at home, our competitiveness, our innovation, our democracy. We will align our efforts with our network of allies and partners acting with common purpose and in common cause and harnessing these two key assets will compete with China to defend our interests, and build our vision for the future,” he added.

Blinken spoke of the Quad in this context, referring to a grouping of the US, India, Japan and Australia that is focused on the Indo-Pacific region. The group leaders met in Tokyo earlier in the week, which was their fourth summit since the first in March of 2021. He also mentioned India’s membership of the US-led Indo-Pacific Economic Framework for Prosperity, which was launched by President Biden in Tokyo past Monday in the presence of Prime Minister Narendra Modi and Japan’s Prime Minister Fumio Kishida.

But the US will also “engage constructively” with China where it can. “Not as a favor to us or anyone else, and never in exchange for walking away from our principles,” Blinken said, “but because working together to solve great challenges is what the world expects from great powers, and because it’s directly in our interests to do so.”

On Taiwan, the secretary of state said US policy remained unchanged, which was notable coming in the light of President Biden’s recent remarks that America will intervene militarily if Taiwan was attacked by China. US officials had walked that back as once before when the president had seemingly changed decades all policy of “strategic ambiguity”, essentially that the US will not reveal what it will do exactly if China invaded Taiwan.

“The United States remains committed to our ‘one China’ policy, which is guided by the Taiwan Relations Act, the three Joint Communiques, the Six Assurances,” Blinken said, adding, “We oppose any unilateral changes to the status quo from either side; we do not support Taiwan independence; and we expect cross-strait differences to be resolved by peaceful means.”

He went on to say that “while US policy has not changed, what has changed is Beijing’s growing coercion”.