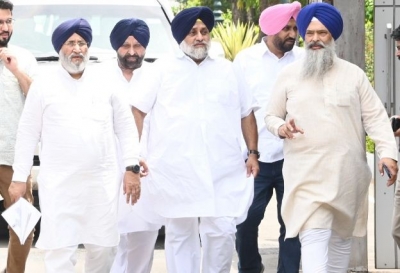 The Shiromani Akali Dal (SAD) on Friday requested Governor Banwarilal Purohit to direct Punjab Chief Minister Bhagwant Mann to withdraw his statement on surrendering the state’s rights over Chandigarh, besides apprising the Union Home Minister that Punjabis will not tolerate transfer of even one inch of land in Chandigarh to Haryana.

A delegation of the party led by SAD chief Sukhbir Singh Badal submitted a memorandum in this regard to the Governor here.

Asking the Governor to direct the Chief Minister to protect the interests of Punjab, the delegation apprised the former that Mann had not protested against the steady erosion of Punjab’s rights in Chandigarh, including creation of the UT cadre, implementation of Central pay scales and dilution of the status of Punjabi language, besides other crucial issues like removal of Punjab’s representative in the Bhakra Beas Management Board (BBMB).

Asserting that Chandigarh was an inalienable part of Punjab, Badal apprised the Governor that this was ratified during the Punjab Reorganisation Act of 1966 and later by way of the Rajiv-Longowal accord which had been ratified by both Houses of Parliament as well as the Haryana Assembly.

He said accordingly the Governor should apprise the Centre of the situation and recommend transfer of Chandigarh to Punjab.

The delegation also briefed the Governor that the uncertainty created by the action of the Punjab government and the Union Home Minister could vitiate the peaceful atmosphere of the state.

“We appeal to you to take appropriate steps to ensure Punjabis that Chandigarh belongs to them and will not be taken away from them under any circumstances,” the delegation, which also comprised Prem Singh Chandumajra, Maheshinder Singh Grewal and Daljit Singh Cheema, told the Governor.

The SAD also requested that all decisions taken by the Chandigarh administration from time to time which were against the letter and spirit of Punjab Re-Organisation Act, including dilution of Punjabi language status, violation of 60:40 ratio, implementation of Central scales and creation of separate UT cadre, should be reviewed.

They also apprised the Governor that AAP leader Raghav Chadha had been appointed Chairman of the state advisory committee unconstitutionally. They said the state had violated the Legislative (Prevention of Disqualification) Act, 1959 which debarred any MLA or MP from holding any office of profit, and demanded Chadha’s appointment be scrapped immediately.