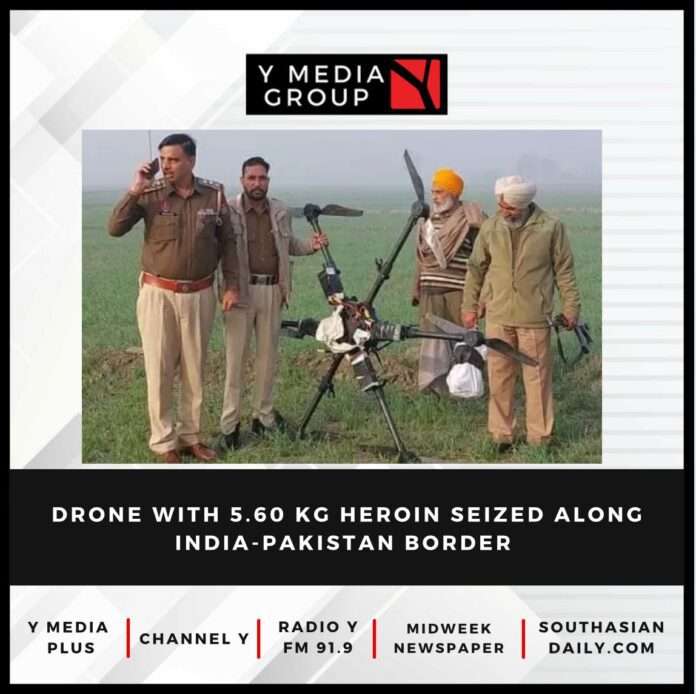 Punjab Police on Friday foiled a major drug smuggling bid by Pakistan-based smugglers with the recovery of five packets of heroin, weighing 5.60 kg, along with a hexacopter drone, which was used to drop the consignment, during a search operation at border area of Khemkaran in Tarn Taran.

The operation was carried out with the support of the Border Security Force (BSF), a statement by the government said.

Director General of Police (DGP) Gaurav Yadav said after noticing the drone movement in India-Pakistan border on the intervening night of Thursday and Friday, police teams from Tarn Taran district shared the pin-pointed inputs with the BSF and jointly conducted a search operation in the area, which was just 2 km away from the border.

“During the search, a blue and black coloured hexacopter drone (model E616S) along with black tape-wrapped five packets of heroin weighing 5.60 kg was found lying in the agricultural land of a local resident,” he said, adding the preliminary investigations suggest this drone was found to be having a modern technology and it could lift a good amount of weight.

This is the third such drone recovered by the Tarn Taran Police in less than a week.

Earlier, a hexacopter drone and a tape-wrapped package containing six packets of heroin, weighing 6.68 kg, was recovered in the jurisdiction of border outpost Harbhajan in Khem Karan on Tuesday.

On the next day, a broken quadcopter drone was recovered from the area of Van Tara Singh village in Khalra.

Sharing more details, Senior Superintendent of Police Sukhminder Singh Mann said investigations are on to ascertain the identity of Pakistan smugglers, who sent the consignment via drone, and also their Indian associates, who were to receive this air-dropped consignment of heroin.