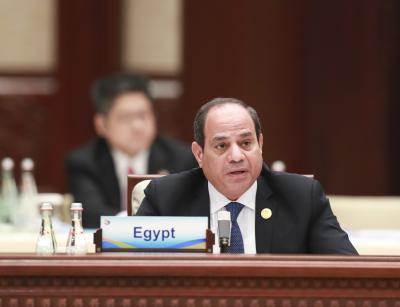 Egyptian President Abdel-Fattah al-Sisi and the US President Joe Biden discussed cooperation between the two countries, the repercussions of the global food crisis, and the disruption of energy supplies, the Egyptian Presidency said in a statement.

Sisi and Biden met in the Saudi Arabian city of Jeddah on Saturday, where they also participated in a joint conference later in the day with the leaders of the Gulf Cooperation Council member states, as well as the Jordanian king and the Iraqi Prime Minister.

This was the first meeting between the Presidents of US and Egypt, Xinhua news agency reported.

During the meeting, Sisi underlined Egypt’s keenness to strengthen cooperation with the US and the importance of the Egypt-US partnership in promoting peace and stability in the Middle East region, according to the statement.

For his part, Biden affirmed his government’s aspiration to activate the frameworks of bilateral cooperation and enhance the existing coordination and consultation between the two countries.

The Egyptian President also stressed the need to help regional countries through crises and reach a just and comprehensive solution that guarantees the rights of the Palestinian people and the establishment of their independent state, according to the statement.

On the disputed Grand Ethiopian Renaissance Dam that also involves Sudan and Egypt, the Egyptian leader demanded to reach a binding legal agreement for the process of filling and operating the dam, in a manner that preserves Egyptian water security and achieves the common interests of all the three countries.

Akshay Kumar could return to ‘Hera Pheri’ universe as Raju

Akshay Kumar could return to ‘Hera Pheri’ universe as Raju