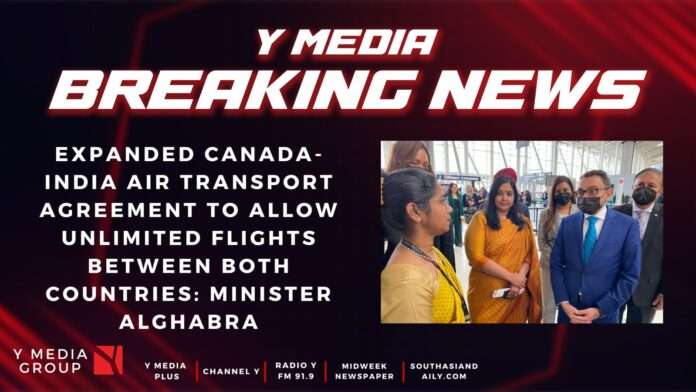 The Minister of Transport, the Honourable Omar Alghabra, today announced the recent conclusion of an expanded air transport agreement between Canada and India. The expanded agreement allows designated airlines to operate an unlimited number of flights between the two countries. The previous agreement limited each country to 35 flights per week.

“The expanded air transport agreement between Canada and India is a positive development for air transport relations between our countries. We are pleased to expand this relationship with additional flexibility for airlines to serve this growing market. By making the movement of goods and people faster and easier, this expanded agreement will continue to facilitate trade and investment between Canada and India and help our businesses grow and succeed,” Minister Alghabra said.

This significant move will allow airlines of Canada and India to better respond to the needs of the Canada-India air transport market. Going forward, officials of both countries will remain in contact to discuss further expansion of the agreement.

The new rights under the expanded agreement are available for use by airlines immediately.

Mary Ng, Canada’s Minister of International Trade, Export Promotion, Small Business and Economic Development, said, “The Canada-India economic relationship is built on deep-rooted people to people ties. With this expanded air transport agreement, we are facilitating even more exchanges of professionals, students, business people, and investors. As we strengthen our trade and investment relationship with India, we will continue building bridges like this that enable our entrepreneurs, workers, and businesses to access new opportunities.”

Share
Facebook
Twitter
Pinterest
WhatsApp
Previous article
On This Very Special Day, Let Us All Celebrate The Innocence And Purity Of Kids & Make Them Feel Precious In Every Way. Happy Children’s Day From Y Media Group!
Next article
Five ways to control sugar levels while eating