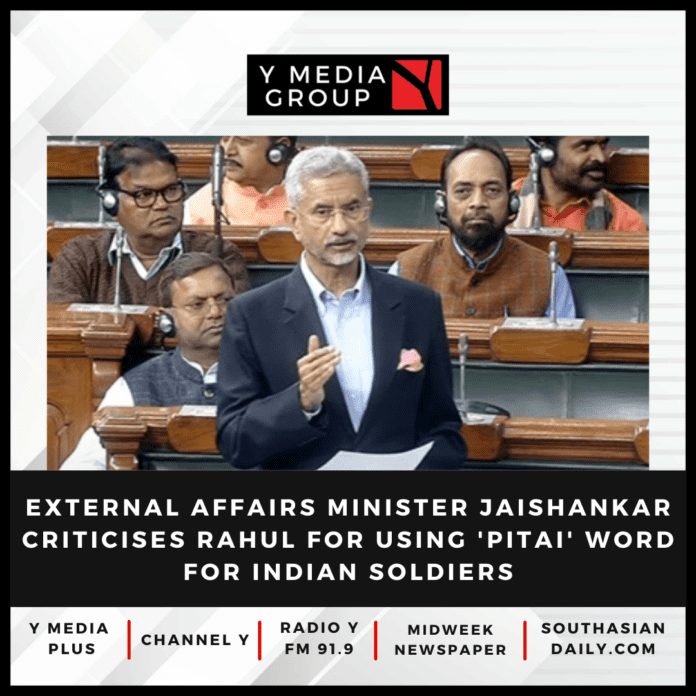 External Affairs Minister S. Jaishankar on Monday criticised Congress MP Rahul Gandhi for using the word “pitai” in the context of clashes between Indian and Chinese troops in Arunachal Pradesh.

While criticising Prime Minister Narendra Modi for being “indifferent” towards Chinese designs on India, in the context of transgression by Chinese troops in Tawang sector of Arunachal Pradesh, the Congress leader had used the word “pitai” for Indian troops, while describing the clashes between Indian and Chinese troops there.

“We have no problems if there are political differences, even if there is political criticism. I have heard sometimes that my own understanding needs to be deepened. When I see who is giving the advice, I can only bow and respect, but I think we shouldn’t directly or indirectly criticise our jawans. Our jawans are standing in Yangtse at 13,000 feet, defending our border, they do not deserve to have the word ‘pitai’. The word ‘pitai’ shouldn’t be used for our jawans,” Jaishankar said in Lok Sabha while replying to a discussion on the Anti-Maritime Piracy Bill.

Last week, Rahul Gandhi had said that the “external affairs minister keeps giving statements, but he should deepen his understanding”.

Gandhi had said this while referring to the Indian and Chinese soldiers face-off in Tawang.

Jaishankar further said that if the government had been indifferent towards China’s transgressions, “then who sent the Indian Army to the border. If we were indifferent to China then why are we pressurising China for de-escalation and disengagement today? Why are we saying publicly that our relations are not normal?”