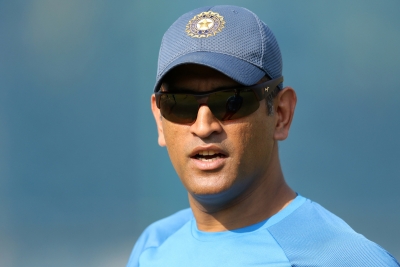 Former India captain M.S Dhoni, who is enjoying his time in England for at least two weeks now, was seen being chased by fans for a selfie with him in the streets of London.

The 41-year-old cricketer is in England since before his birthday on July 7. He celebrated his birthday with his wife, friends and a few Indian cricketers as well.

Apart from that, Dhoni has been to watch India’s matches in the ongoing tour and even met a few of his former teammates in the dressing room after the 2nd T20I and Lord’s ODI.

On Saturday, a fan-video of the CSK skipper went viral where he could be seen walking on the streets of London. A large number of Indian fans were seen chasing him, some were even seen clicking running selfies while the others kept pace with the security personnel surrounding him to get a glimpse of their idol.

The former India captain finally escaped after getting into his car. The video of the whole incident has now gone viral on social media, which shows that Dhoni’s popularity knows no bounds and he has fans across the globe.

Dhoni retired from international cricket in 2020 and only plays IPL now but he still remains one of the most loved cricketers, not just in India, but across the whole world. Apart from MS, a number of former Indian cricketers including batting legend Sachin Tendulkar, Sourav Ganguly, Suresh Raina, Harbhajan Singh among others are currently in England.

And even, the fans are leaving no stone unturned to click selfies with current Indian players during the ongoing tour. Pictures of Indian cricketers with their fans have been floating on social media right since Team India has landed in England.