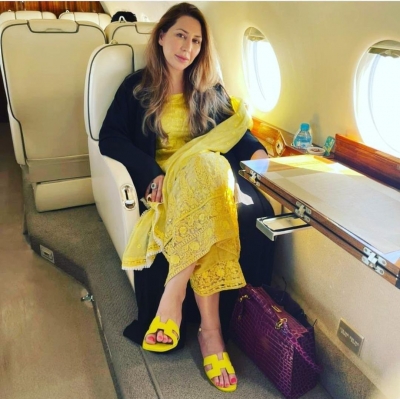 At a presser on Sunday, PML-N leaders played an audio clip involving a property tycoon as purported evidence of the “corruption being done by Imran Khan’s wife Bushra Bibi and Farah Khan” when the Pakistan Tehreek-i-Insaf (PTI) was in power, reports Dawn news.

Ataullah Tarar, the Punjab government’s spokesperson, and PML-N provincial information secretary Azma Bukhari alleged that Farah Khan “ruled over the entire country from her office in Punjab” and accumulated “assets worth billions of rupees”.

Calling her ‘Farah Gogi’, Tarar alleged that she used to “approve transfers and appointments” of government officials in Punjab against hefty payments and the wealth was spent on purchasing diamonds worth billions of rupees.

The diamonds were sent to Dubai, where they were sold off.

He alleged that “the matter is not confined to diamond dealings as information about the selling of expensive paintings and watches will come to the fore soon”, Dawn news reported.

He said proceeds from the sale in Dubai were transferred to Pakistan through hawala and hundi.

He called upon the PTI Chairman to ask ‘Farah Gogi’ to return home and join investigations.

The audio clip allegedly featuring top realtor Malik Riaz and his daughter was played during the presser.

The duo was talking about demands made by Farah Khan in return for some “government favours”.