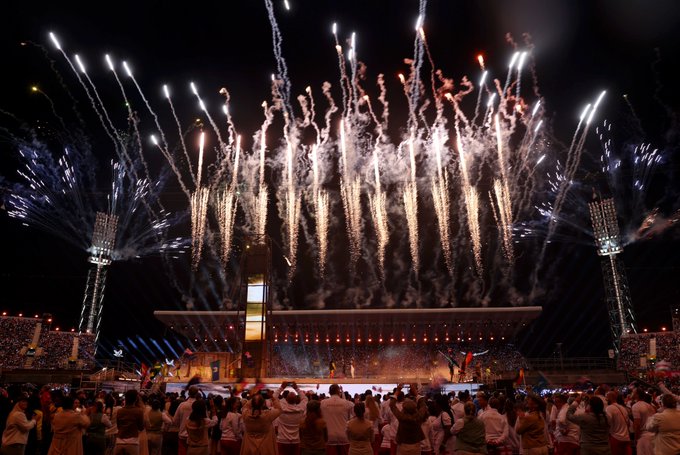 With music that represents the cultural amalgamation that is the lifeblood of the second largest city of the United Kingdom (UK), colour, lights and fireworks, the city of Birmingham bid farewell to the thousands of sportspersons and support staff that had gathered here for the 22nd Commonwealth Games.

So, there was pop music, British Jamaican reggae, Punjabi Bhangra, Asian crossover music, Apache Indian, and local bands presenting their hit numbers producing sounds that are part of a multi-cultural society like Birmingham, at the closing ceremony on Monday evening.

The athletes walked in a random parade to music. The Indian contingent, comprising mostly of officials and some athletes like members of the TT squad, was led by flagbearers boxer Nikhat Zareen and top shuttler Sharad Kamal.

The ceremony, which celebrates the success of 11 days of sporting action that encouraged sportspersons to compete in the spirit of sportsmanship to test their strength, stamina and endurance, had the athletes grooving to the music, letting their hair down to end a two-week journey which they completed with all seriousness.

The Games were declared closed by Earl of Wessex on behalf of Her Majesty, the Queen.

“You have once again brought the spirit and value of the Commonwealth to life,” he delivered her message with these words.

British Jamaican reggae band Musical Youth was formed in Birmingham in 1979 and it presented its biggest hit- ever ‘Pass the Dutchie’.

There were performances by Punjabi MC, which presented ‘Mundian to Bach Ke Rahi’, the first-ever Bhangra song to reach the UK Top 10 in 2002. It was the song of a generation across Birmingham in the 1990s amid a cultural phenomenon known as the Day Timers — when young British Asians went to daytime nightclubs.

A tribute to one of Birmingham’s major global exports of the past decade… The Peaky Blinders, the epic TV show about the city’s most notorious gang. Walsall-born superstar Goldie and Birmingham’s Beverley Knight come together to perform ‘Inner City Life’.

Ballet Dance company Rambert paid tribute to the most famous gangsters of Small Heath and one of Birmingham’s most recent success stories, to the song that encompasses the opening credits, ‘Red Right Hand’.

The Commonwealth Games flag was lowered and handed to Victoria 2026 Commonwealth Games. The Commonwealth is one of the world’s oldest associations of countries, and the Games have a century-long tradition of celebrating friendship through sport and youth. The flag, a proud symbol of that friendship, was raised at Alexander Stadium during the opening ceremony.