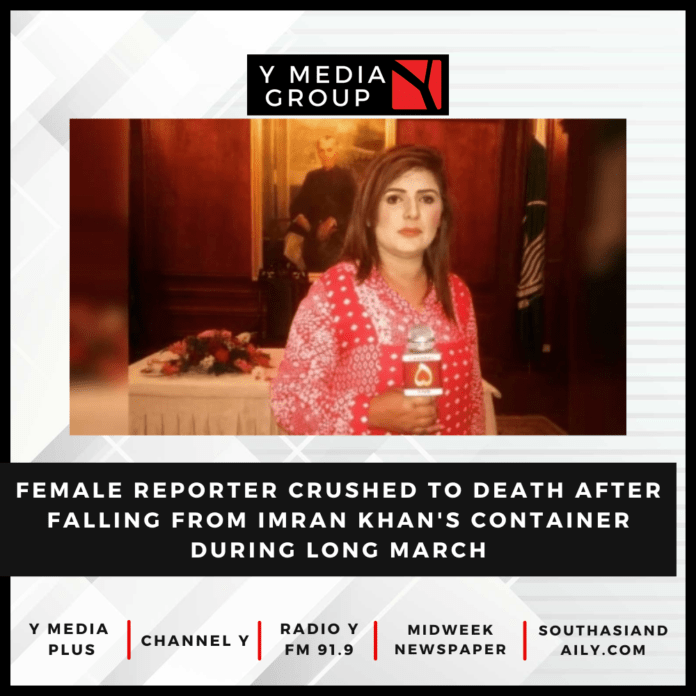 Sadaf Naeem, a reporter covering the PTIs long march for Channel Five, was crushed to death in an accident near Sadhoke in Gujranwala district on Sunday, media reports said.

According to Channel Five, the reporter was run over by PTI Chairman Imran Khan’s container. The media outlet said that Naeem fell from the container after which she was crushed by the vehicle, Dawn reported.

PTI leader Fawad Chaudhry confirmed the development, saying that a female mediaperson was killed and that Imran Khan had himself got off the vehicle to inspect the incident while Rescue 1122 was alerted as well.

“We are not 100 per cent sure about the identity, but the reports are very bad,” Chaudhry said prior to the confirmation by the Channel Five.

Chaudhry requested the public to take caution while walking along Imran Khan’s container, adding that the lives of all people contributing to the march are “precious and respected”.

As a result of the incident, the PTI called off Sunday’s activities in solidarity with the accident victim.

Soon after, Khan extended his condolences to the reporter’s family.

“I say this with utmost regret that due to an accident we are postponing the march today. We pray for the patience and strength of the woman’s family to deal with the tragedy,” he said in a brief address to supporters.