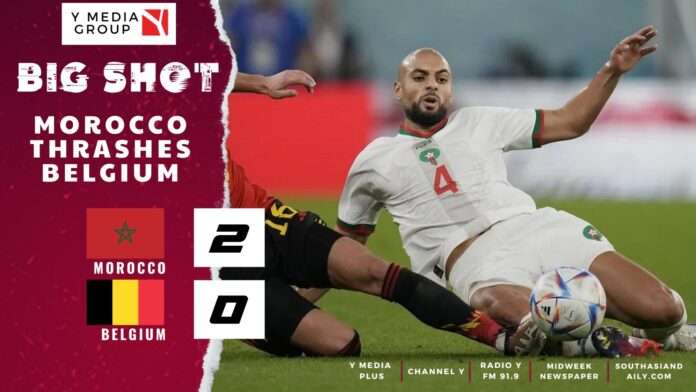 In a FIFA World Cup which is turning up to be a bagful of surprises, it was the turn of Morocco to upset World No.2 side Belgium 2-0 in the Group F match of the football showpiece event at the Al Thumama Stadium on Sunday evening.

After a barren first half, substitutes Abdelhamid Sabiri and Zakaria Aboukhlal did the trick for Morocco, scoring in the 73rd minute and in the second minute of stoppage time.

For coach Walid Regragui, who took charge of Morocco in September, the match against Belgium was his sixth in charge and till now they have kept clean-sheets in all six games with him at the helm of affairs.

The win, their first in 24 years, sends Morocco into first place in the group with four points after having drawn goalless with 2018 runner-up Croatia, who take on Canada in the last match on Sunday.

Belgium, who were far from impressive in their first match of the group, which they won 1-0 against Canada, have three points from two matches and next face Croatia,

Morocco beating Belgium is the third major upset of the championship which is into its eighth day.

In the earlier matches, Argentina ranked third on the FIFA computer had crashed to a 2-1 loss against Saudi Arabia ranked 51, while World No.11 Germany had lost by an identical score to Japan, who are ranked 13 places below the Germans.

Morocco had to make a last-minute change to their starting XI when goalkeeper Yassine Bounou pulled out after the anthems — for reasons not yet specified — and was replaced by Monir El Kajoui. The understudy made an early save to settle any nerves when smothering an attempt by Michy Batshuayi at close range.

Morocco had the majority of the crowd at Al Thumama Stadium on their side and they thought they had given them a goal to celebrate in stoppage time at the end of the first half when Hakim Ziyech whipped in a free-kick from wide on the right that beat Thibaut Courtois at his near post.

However, Romain Saiss, standing right in front of the goalkeeper, was ruled offside after a VAR check.

Before that, Belgium had had another scare 10 minutes after the break when Sofiane Boufal cut in from the left and shot just past the far post. The Red Devils’ reprieve would be brief, however, as they fell to their first loss in the group stage of the World Cup since Saudi Arabia beat them at USA 94.

Sabiri’s introduction after 68 minutes was his cue to spark arguably Morocco’s greatest World Cup victory. He still has not started a game for his country in a World Cup but took just five minutes to score the most important goal of his life, on what was his fourth international outing, whipping in a free-kick from a position wide on the left, just a metre or two from the touchline into the near post and beating Courtois, who has come off his line ready to try and take the cross.

Roberto Martinez’s 2018 semifinalists fell again this time in stoppage time. El Kajoui’s long goal-kick was headed back towards his own goal by a Belgian defender.

Ziyech seized upon the loose ball, swerved away from Timothy Castagne and cut the ball back toward Aboukhlal at the near post. He sorted his feet out beautifully and clipped a first-time shot into the roof of the net.

“It’s a difficult result because the first goal affected the outcome a lot. It’s a dead-ball situation, we couldn’t get our game going and it’s a game that we need to understand. We need to be together and react in the next game. That’s what happens in the World Cup.

“The way we defended the goal is the way we have been defending free-kicks for six years, that’s not the issue. It’s a good ball in, it’s nothing to do with the setup.

“I think we had good moments but we couldn’t get clear-cut chances, we only had a couple of half opportunities and if you allow that goal to be conceded then it changes the game radically.

“At the moment we conceded the goal we lost our composure too much and we couldn’t get ourselves back in the final third with more thought,” he added.

Morocco thoroughly deserved their victory. Their game plan worked and they hit Belgium on the break.

The substitutes scored the goals, rewarded for a second-half performance full of purpose, style and intensity. Sofiane Boufal and Hakim Ziyech were also terrific, and the defence — which still hasn’t conceded a goal under Regragui — restricted Belgium to only one decent chance.