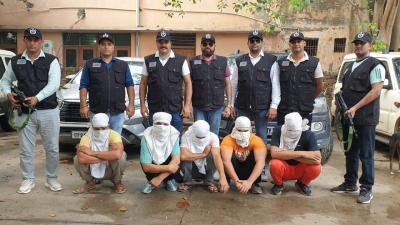 A police spokesperson said the arrested persons include Chiraag, who was handling the drug trade in south Haryana, and is the younger brother of Tinu Bhiwani, who was arrested in the Sidhu Moosewala murder case.

The other arrested accused were Bakkarwala, Prakash Barmer, resident of Rajasthan’s Barmer, Amit of Pinjore (Haryana) and Sanjay, a resident of Punjab’s Zirakpur.

Acting on a tip-off, the STF laid a trap near Bahadurgarh bypass and apprehended the five.

Superintendent of Police, Sumit Kumar said the accused were active members of the Bishnoi gang and supply luxury vehicles and drugs to the gang. They also supply weapons to the gang from Delhi to Haryana and Punjab, besides making extortion calls.

The accused were arrested when they were entering Haryana from Delhi in stolen Innova and Scorpio vehicles.

Accused Bakkarwala and other arrested miscreants came in contact with Lawrence Bishnoi and Sampat Nehra, a key member of Bishnoi gang, through notorious gangster Tinu Bhiwani.

During interrogation, Bakkarwala revealed that apart from providing weapons and drugs to the Bishnoi gang, he has also been a habitual offender of stealing luxury cars. He has so far stolen hundreds of luxury vehicles from different states.

He has been arrested many a time and escaped by dodging the police. Many cases are registered against him in Delhi, Haryana, Uttar Pradesh and Punjab.

In addition, Bakkarwala has been jailed for about 10 years till now.