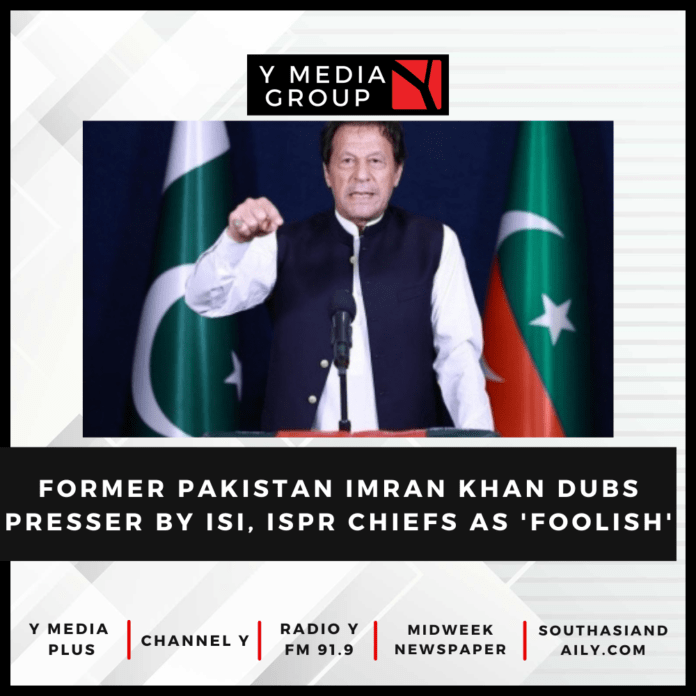 PTI chief Imran Khan has dubbed the recent joint press conference by the chiefs of the country’s premier spy agency and military’s media affairs wing as “foolish”, claiming that only “lies and half-truths” were told in it, media reports said.

Khan made these remarks in an interview with BBC Urdu on Friday night after the start of his protest march in Lahore, Dawn reported.

The former Prime Minister, who is currently leading his party’s anti-government long march towards Islamabad, has been increasingly critical of the army since his ouster as the country’s chief executive through a no-confidence vote in April, the report said.

During the explosive press conference, Anjum claimed that the Chief of Army Staff, Qamar Javed Bajwa, was given a “lucrative offer” in March for an extension in his tenure, but it was rejected.

While the ISI chief did not elaborate any further on this subject, it is being perceived that the said offer was made by then Prime Minister Khan to seek the army chief’s intervention and survive the opposition’s no-confidence vote.

When BBC Urdu asked Khan about it, he said: “Things have been taken out of context that we made an offer for an extension. Did they tell which side made the offer? In what context the discussion took place? If they tell the whole story, it would be very embarrassing for them.”

The former PM went on to describe the press conference as “very sad” as the ISI chief had never before held a presser in such a manner.

“I can respond to it point by point, which could be very embarrassing for the army,” Dawn reported.

He continued, “But we don’t want any harm to our institution of the army as our enemies want the army to weaken and in turn, Pakistan weakens.”

Khan was also asked about the DG ISI highlighting contradictions in his statements about the army chief.

In reply, the PTI chief said, “We will praise when they will do good. It is childish to [think] that if we praise you, you will always be good. You also appreciate your children but also criticise them when they do something bad. It was actually a very foolish press conference.”

The ISI chief’s press conference was the first instance in Pakistan’s history of the head of the country’s spy agency directly addressing the media. During the presser, the ISPR chief had also announced that the military establishment had decided that it would restrict itself to its constitutional role, Dawn reported.

In the interview with BBC Urdu, Khan also clarified that he “does not want to come to power because of the establishment’s approval”.

Answering a question about his ties with the establishment, he insisted that his party’s win in the 2018 elections was not engineered by the military, Dawn reported.

The PTI chief said that the purpose of his protest march was free and fair elections and that was why his party wanted to introduce electronic voting machines. But the “two big parties and the [chief] election commissioner, who takes orders from elsewhere, did not let it happen,” he regretted. “As a result, our election will always be controversial and chances of interference will remain”.

He elaborated that while the long march was aimed at free and fair elections, the broader purpose of the PTI’s struggle for “Haqiqi Azadi” (true freedom) was that “Pakistan’s decisions be taken inside Pakistan. That nobody dictates us from outside… I want an independent foreign policy”.

Moreover, the PTI chief continued, “I want the supremacy of law”.

“Here, there is the law of jungle,” he lamented, decrying people being picked up, them being subjected to torture, restrictions on the media and the treatment of journalists in the country.

“If he wants to protect the image of the institution of the army, Gen Bajwa should take action,” the PTI chief urged, Dawn reported.