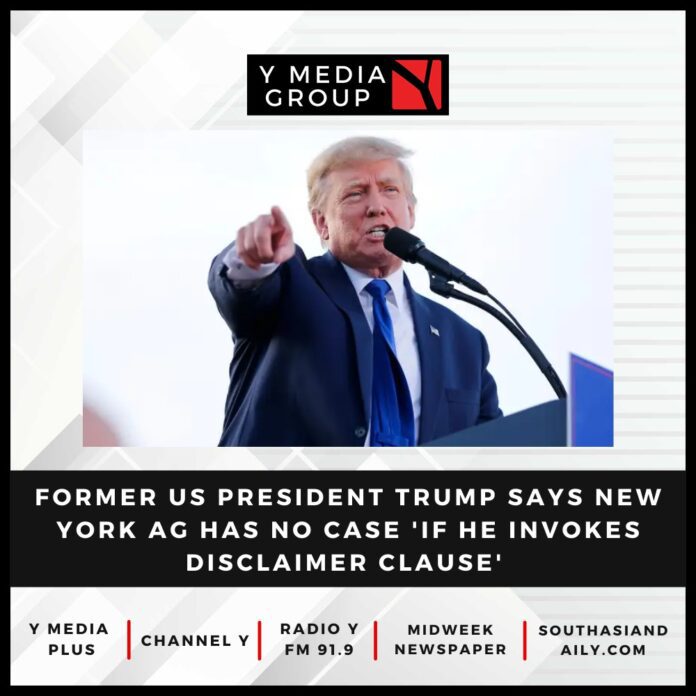 James had sued Trump and his three grown up children of perpetuating a fraud over a decade by overstating the net worth of their assets and securing loans and evading taxes.

Trump’s net-worth statements start with disclaimers that essentially warn lenders: “Check my math.” The statements were unsealed last week as part of James’ fraud lawsuit against Trump. Trump told Sean Hannity of Fox News the disclaimers absolve him of any responsibility and the AG has “no case”.

Trump hunched forward in his gold-painted, spindle-backed chair under the chandeliers of Mar-a-Lago’s glittering grand ballroom and told Sean Hannity why New York’s Attorney General, who’d sued him earlier that day, has “no case”, says the Business Insider.

“We have a disclaimer,” Trump told the Fox News host. “Right on the front. And it basically says, you know, get your own people. You’re at your own risk … It may be way off.”

Trump was describing the disclaimer that fills the second and third pages of his annual proclamations of net-worth – the 20-page “Statements of Financial Condition” at the center of AG Letitia James’ massive lawsuit against the former president, his three oldest kids, and his real estate and golf resort empire.

James calls these statements “fraudulent”, and says each one is filled with wildly exaggerated math – implausible numbers that misled banks into lending Trump and the New York-incorporated Trump Organization hundreds of millions of dollars over the past decade.

But Trump told Hannity none of that would matter because each Statement of Financial Condition begins with a warning. “Be careful,” Trump told Hannity the disclaimers essentially say. “Because it may not be accurate. It may be way off … get your own people. Use your own lawyers,” Trump added. “Don’t rely on us.”

Former financial crimes prosecutor Armen Morian, who worked for the AGs office from 2006 to 2019 before founding Morian Law, believes Trump has a point. Sure, the annual Statements of Financial Condition may be filled with real whoppers, including all those years – from 2012 through 2016 – when they tripled the actual square footage of Trump’s triplex atop Manhattan’s Trump Tower, adding as much as $200 million a year to the former president’s net worth.

But each year, the disclaimers put banks on notice to double check the numbers before relying on them in deciding how much to lend and at what rate of interest, Morian said. And if the banks cut Trump a good deal anyway, despite this warning – as Deutsche Bank did year after year, pouring hundreds of millions of dollars into his Miami golf club, his skyscraper in Chicago and the Old Post Office in DC – then they did so with eyes wide open, he said.

“What the disclaimers are saying is, ‘Beware when you read these financial statements,'” Morian said, after a decade’s worth of the statements were unsealed in court filings last week. “That’s all it has to do,” he said of their disclaimers, affixed to the front of each year’s statement by longtime Trump accountants Mazars USA.

Morian noted that these are “robust” disclaimers – set down right in the open, not hidden in fine print. “We have not audited or reviewed the accompanying financial statement,” their first paragraphs say, in boilerplate language repeated through the years.

And so, the accountants at Mazars, “do not express an opinion or provide any assurance about whether the financial statement is in accordance with accounting principles generally accepted in the United States of America.”

Deutsche Bank in particular – the largest single lender to the Trump Organization and Donald Trump over the last ten years – is a “sophisticated counterparty,” Morian said. They well knew Trump’s reputation for puffery in an industry – real estate – already known for puffery.

“All of that,” Morian said, “essentially renders the disclaimer an absolute defence.”

A license to exaggerate? To lie? So, a business can lie about its worth? And get away with it, just by warning, as Trump put it, “It may not be accurate. It may be way off?”

“There is something unsatisfying about it,” Morian conceded. “But I have a hard time taking off my hat as a lawyer. This is a legal question, and it turns on facts and the law. That’s the game we’re playing in, and that’s the game the attorney general is playing in also, the Insider said.

“It’s shocking that they brought this case,” Morian said. But not everyone agrees, least of all the former president’s fixer-turned-critic, Michael Cohen, who turned over Trump’s Statements of Financial Condition for 2011 through 2013 as part of his testimony before Congress in 2019.

“The attorney general was not filing a 200-plus page lawsuit, after three years of investigatory work, to have her case negated by a disclaimer,” Cohen told Insider. That disclaimer was written and signed by Mazars in order to protect Mazars, not Trump, Cohen noted.

These are not our numbers, Mazars essentially tells would-be lenders, and you’ll get no assurances from us on their accuracy. Diana Florence, a former Manhattan prosecutor for complex financial fraud cases, agreed. “Sure, they’re a hurdle,” she told Insider of the disclaimers. “They do weaken the case.”

But that’s not the full story, she said. The AG is alleging that ten years of Trump’s Statements of Financial Condition contain a total of some 200 false and misleading valuations involving 23 properties. Deutsche Bank can’t be expected “to literally chase down everything in the statement and verify it,” Florence said. And while James’ lawsuit shines its widest, brightest spotlight on the Statements of Financial Condition, it suggests that other paperwork could put Trump at greater risk.

Through the years, Trump or his children signed multiple documents that personally attest to Mazars and to Deutsche Bank that the Statements of Financial Condition are accurate, or at least “fairly” represent Trump’s worth, the lawsuit alleges.

And those “boilerplate disclaimers?” James’ lawsuit is aware of them. “The disclaimers … do not give license to Mr. Trump or the Trump Organization to submit to their accountant’s fraudulent and misleading asset valuations for inclusion in the Statements,” the lawsuit says.

“Trump could say, ‘Yeah, if Deutsche Bank were really worried, they could have asked for more things or could have turned us down. They didn’t do any due diligence,'” Florence said.

“But it doesn’t change what the case is about, which is patterns of fraud.” The AGs office and lawyers for Trump did not immediately respond to requests for comment. In February, Mazars quit working for Trump entirely – in the middle of preparing his and Melania Trump’s tax returns – and issued the ultimate disclaimer by saying that the last 10 years of Statements of Financial Condition “should no longer be relied upon.”

In declining to comment, a Mazars spokesperson said, “We remain committed to fulfilling all of our professional and legal obligations.”