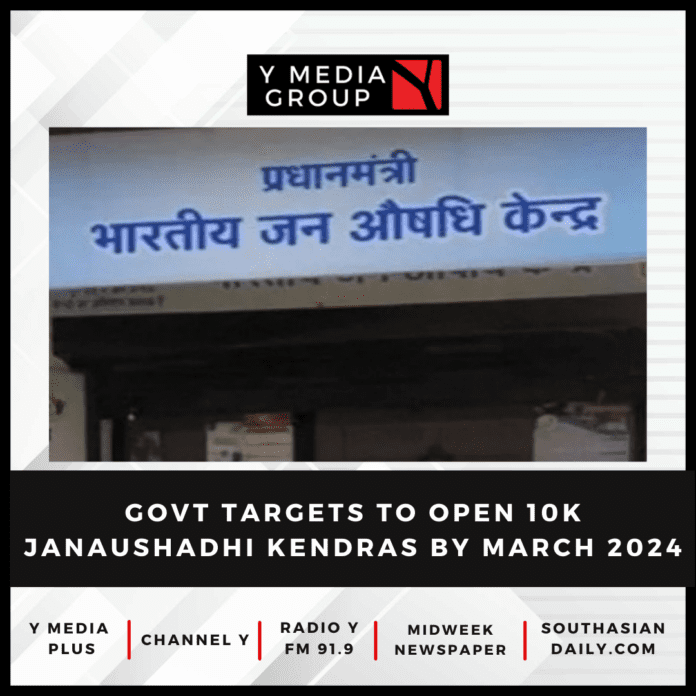 While more than 9,000 stores under the Pradhan Mantri Bhartiya Janaushadhi Pariyojana (PMBJP) covering 743 out of 766 districts across the country have been opened, the government has set a target to increase the number of ‘Janaushadhi Kendras’ to 10,000 by March 2024.

With an objective of making quality generic medicines available at affordable prices for all, the PMBJP was launched by the Department of Pharmaceuticals in November 2008. The target of opening 3,000 Kendras was achieved in December 2017. Further, a revised target of 6,000 outlets was also achieved in 2020. The number of Kendras has now increased to 9,000.

In addition to this, various nutraceutical products like protein powder, malt-based food supplements etc., along with some AYUSH products like Ayuraksha kit, Balraksha kit and Ayush-64 tablet have been added to the product basket.

According to the Department of Pharmaceuticals, medicines available under PMBJP are priced 50-90 per cent less than branded medicines.

In the financial year 2021-22, sales of Rs 893.56 crore has been done, which has led to savings of about Rs 5,300 crore for the citizens as compared to branded medicines.

Under PMBJP, an incentive of Rs 5 lakh is provided to the Janaushadhi Kendras as financial assistance, and one-time additional incentive of Rs 2 lakh (as reimbursement for IT and infra expenditure) is being provided to the Janaushadhi Kendras opened in the Northeastern states, Himalayan areas, Island territories and backward areas mentioned as aspirational districts by the NITI Ayog, or if opened by women entrepreneur, ex-serviceman etc.

There are four warehouses in Gurugram, Chennai, Guwahati and Surat to facilitate uninterrupted supply and faster delivery to remote and rural areas.