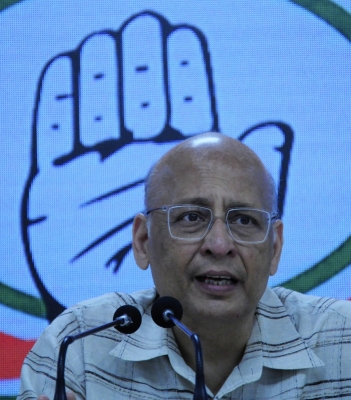 The Congress on Wednesday came down heavily on the BJP government at the Centre, accusing the ruling dispensation of treating its party leaders as ‘terrorists’.

“The entire country is watching as an investigating agency has been deployed mindlessly against the leadership of India’s oldest political party. You (the BJP) are treating this party, its leaders and institutions as terrorists,” Congress spokesperson Abhishek Manu Singhvi said during a media briefing.

The Congress press conference came soon after the Enforcement Directorate sealed the office of Young Indian Pvt Ltd located in the Herald House here, days after the party’s interim President Sonia Gandhi and her son Rahul Gandhi were grilled in connection with the National Herald case.

“The word fear is not there in the dictionary of the Congress,” Singhvi said, adding that the Congress leadership’s voice will not be silenced with such “cheap tactics”.

“On the contrary, you are underlining your acts and omissions by these diversionary tactics… But we will never relent whatever be the cost. We will never abdicate our responsibilities as a responsible opposition,” Singvi said.

The Congress leaders also said that they had planned to hold a demonstration outside the residences of Prime Minister Narendra Modi and President Droupadi Murmu, but they were denied permission by the Delhi Police.

“Delhi Police did not give us permission to stage the protest. Our protest was againt inflation, unemployment and GST on food items. But we will continue to protest even if our party leaders are put behind bars,” Congress leader Ajay Maken said.