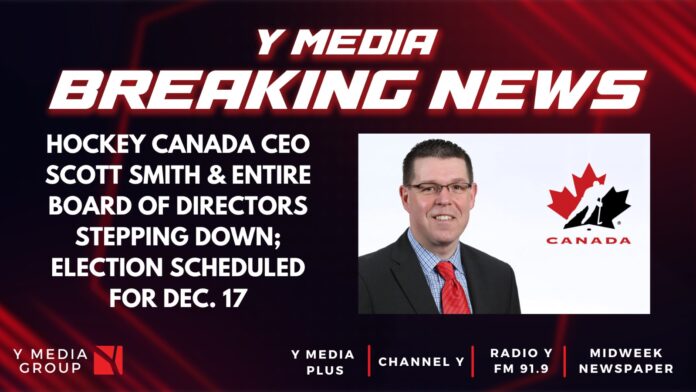 The Hockey Canada Board of Directors has announced important changes to Hockey Canada’s leadership team. Effective immediately, it announced the departure of chief executive officer Scott Smith. The entire Board has also agreed to step down to make room for a new slate of directors.

An interim management committee will be put in place, which will guide the organization until no later than a newly constituted Board appoints a new CEO to lead the organization.

Recognizing the urgent need for new leadership and perspectives, the entire Board of Directors announced it will step aside and pursuant to Hockey Canada’s By-Laws, the Board will ask its Members to select a new slate of directors by no later than the forthcoming virtual election scheduled for December 17, 2022. The Board will not seek re-election and will fulfil its fiduciary duties until such time as a new Board is elected.

Hockey Canada is seeking board candidates to shape the future of the organization. We encourage qualified individuals to respond to the call for nominations issued by the independent Nominating Committee last week.

The interim Management Committee will focus on day-to-day operations and ensure progress on the implementation of Hockey Canada’s Action Plan, including reviewing and working with the Board and Members towards the full implementation of the independent governance review recommendations from The Honourable Thomas Cromwell, C.C., former Supreme Court Justice as well as working to facilitate the effective transition to a new CEO and Board.