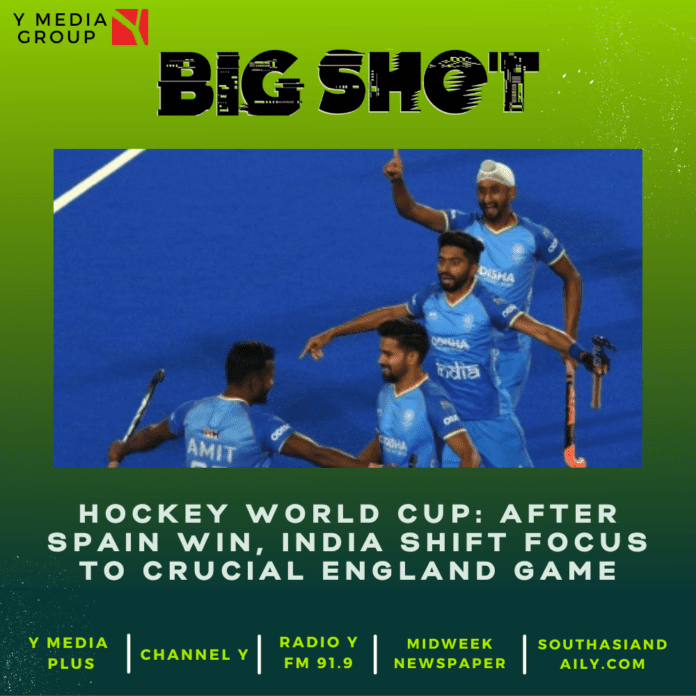 Playing in front of a packed crowd, the Indian Men’s Hockey Team put up a scintillating show to claim a thrilling 2-0 win in their opening match of the FIH Hockey Men’s World Cup 2023 here at the brand-new Birsa Munda Hockey Stadium.

While it was local lad Amit Rohidas and young midfielder Hardik Singh who got on the scoresheet, it was a rock-solid defence that helped the hosts kickstart their campaign with a stunning win.

He further reflected, “We have been practising playing with 10 men as we thought at some point in the tournament we are going to play with 10 me, and we played with 10 men today. It was good. I think we got in front a lot today, and that was really important. We were first with the ball and that makes a lot of difference in these sort of games.”

Echoing the Chief Coach’s remarks, Captain Harmanpreet Singh, said, “We speak daily that we have to be defencively strong because even if you score or not, it is important to be strong in defence and you can’t afford to make silly mistakes. All the boys did well when we were one man down, and as the coach mentioned we have been focusing on practicing in the box and that helped us in the game.”

Reflecting on his personal performance, the ace drag-flicker said, “Yes, I missed converting the Penalty Corners and a Penalty Stroke, but it is part of the game. I need to forget, move ahead and focus on what’s next. Overall, we played really well. Our forwards created Penalty Corners whenever they were entering the D, so it’s a positive sign for us, and our focus for the next match will be to convert such chances.”

The Indian Team’s opponents for the second Pool D match, England, are coming off a dominating 5-0 win over Wales. In their previous match-up at the Pool stage of Birmingham 2022 Commonwealth Games, both teams produced a nerve-wreaking 4-4 draw.

When asked about the team’s mindset for the next game, Harmanpreet said, “Learnings, confidence, energy, tone and work rate – we will go with all that in the next game because these things are very important.”

Meanwhile, Chief Coach said, “What I am pleased about is – firstly, it is the defencive effort. Secondly, I think we handled the ball pretty well. If you look around the park, there were not too many people who didn’t play well yesterday. That is what you need to win a World Cup, you need everyone to be playing at their highest.”

“Yes, you can have one or two that have a bad game here or there, but the objective is to have as many people as you can, playing well. We need to continue with that in the next game against England,” he concluded.

At 1900 hours IST on January 15, India will take on England in their second pool D match.