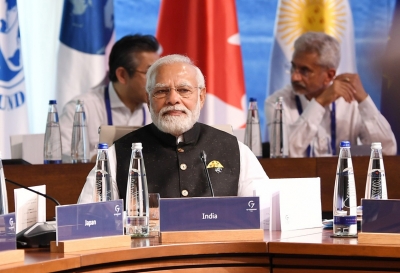 Prime Minister Narendra Modi on Monday said a huge market for clean energy technologies is emerging in India, calling G-7 countries to invest in research, innovation, and manufacturing in this field.

Modi, during his speech at the session on ‘Investing in a better Future: Climate, Energy, Health’ at G7 Summit in Germany, said ancient India has seen a time of immense prosperity.

“Then we have also tolerated the centuries of slavery, and now independent India is the fastest-growing big economy in the whole world.

“But during this whole period, India did not let its commitment to the environment get diluted even a single bit. 17 per cent of the world’s population resides in India. But, our contribution of global carbon emissions is only 5 per cent. The main reason behind this is our lifestyle, which is based on the theory of co-existence with nature,” he said.

He further said: “All of you will also agree with this that energy access should not be the privilege of the rich only – a poor family also has the same rights on energy. And today when energy costs are sky-high due to geopolitical tensions, it is more important to remember this thing. By taking inspiration from this principle, we delivered LED bulbs and clean cooking gas door-to-door in India and showed that millions of tons of carbon emissions can be saved while ensuring energy for the poor.

“Our dedication to climate commitments is evident from our performance. We have achieved the target of 40 per cent energy-capacity from non-fossil sources 9 years before time. The target of 10 per cent ethanol-blending in petrol has been achieved 5 months before time. India has the world’s first fully solar power operated airport. India’s huge railway system will become net zero in this decade,” said the Prime Minister.

Modi said when a large country like India shows such ambition, other developing countries also get inspiration.

“We hope that the rich countries of G-7 will support India’s efforts. Today, a huge market for clean energy technologies is emerging in India. G-7 countries can invest in research, innovation, and manufacturing in this field. The scale that India can provide for every new technology can make that technology affordable for the whole world. The core theories of the circular economy have been an integral part of Indian culture and lifestyle,” he added.

“I called for a movement called LIFE – Lifestyle for Environment – in Glasgow last year. This year on World Environment Day, we launched the Global Initiative for LiFE campaign. The goal of this campaign is to encourage an eco-friendly lifestyle. We can call the followers of this movement Triple-P i.e. ‘pro planet people’, and we should all take the responsibility of increasing the number of Triple-P people in our own countries. This will be our greatest contribution to the coming generations,” Modi said.

“Therefore, we have adopted the approach of one world, one health. During the pandemic, India found many creative ways to use digital technology in the health sector. G7 countries can help India to take these innovations to other developing countries. Recently we all celebrated the International Day of Yoga. In times of the Covid crisis, Yoga has become a great tool for preventive health for people all over the world, this helped many people to maintain their physical and mental health,” PM Modi said.