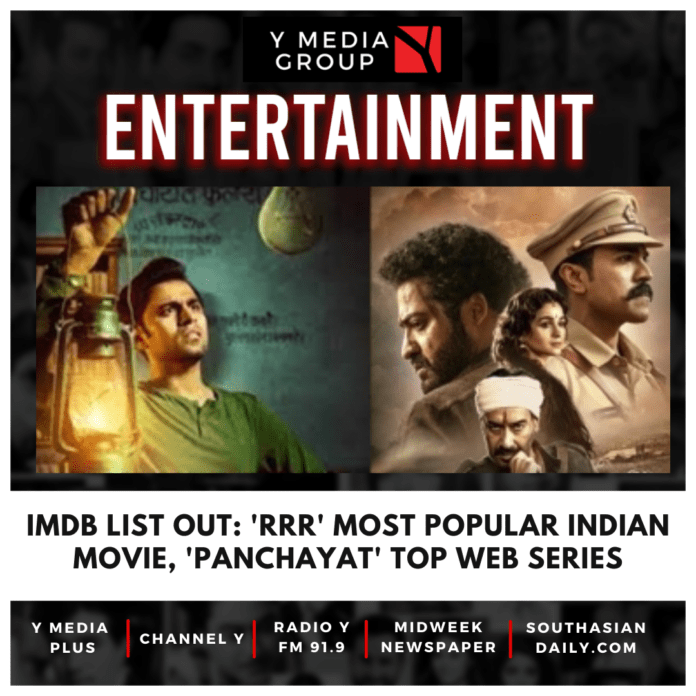 South Indian films seem to be ruling the roost as nine out of ten most popular Indian movies on the IMDb list, are from southern states starting with S.S. Rajamouli’s magnum opus ‘RRR’ which landed the top spot followed by ‘The Kashmir Files’ – the only Hindi language film in the list.

Speaking on ‘RRR’ being the IMDb Most Popular Indian Film of 2022, filmmaker Rajamouli said, “RRR is a tale of friendship which everyone can relate to, told in a style that’s inspired by ancient Indian storytelling and is a film I hold very close to my heart.”

He added: “I am grateful to IMDb for the honour and would like to thank viewers worldwide for their love and appreciation. This celebration belongs to the entire cast and crew who worked relentlessly to create the magic viewers witnessed on screen.”

The third spot on the list was grabbed by the Yash-starrer ‘K.G.F: Chapter 2’ followed by ‘Vikram’ which starrer the heavyweights of Tamil, Malayalam and Telugu cinema – Kamal Haasan, Vijay Sethupathi, Fahad Faasil and Suriya.

The Rishab Shetty-starrer surprise superhit ‘Kantara’ too features on the the list at the 5th position with R. Madhavan’s directorial debut ‘Rocketry: The Nambi Effect’ a biopic on the Indian space scientist Nambi Narayanan, grabbing the No. 6 position.

‘Major’, another biopic on the list, based on the Indian Army officer – Major Sandeep Unnikrishnan, who laid his life in service to the nation during the 26/11 attacks of Mumbai, is on the No. 7 spot.

The Dulquer Salmaan, Mrunal Thakur and Rashmika Mandana-starrer ‘Sita Ramam’ is landed on the No, 8 position with Mani Ratnam’s magnum opus ‘Ponniyin Selvan: Part 1’ on 9th and ‘777 Charlie’ on 10th spot respectively.

As for web series, ‘Panchayat’ is the most popular Indian series as per IMDb followed by ‘Delhi Crime’, ‘Rocket Boys’ and ‘Human’ on second, third and fourth spot respectively.

Share
Facebook
Twitter
Pinterest
WhatsApp
Previous article
Three Men Charged In Fatal Stabbing Of Indian Dairy Worker In New Zealand Pled Not Guilty And Will Go To Trial In 2024
Next article
KJo Celebrates 21 Years Of ‘K3G’, Says He Still Soaks In All The Love