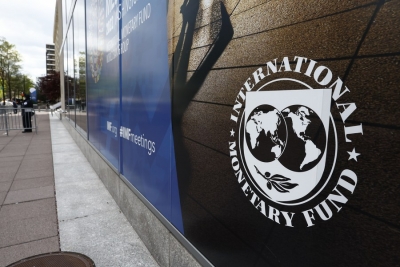 The International Monetary Fund (IMF) has projected the global economy to grow by 3.2 per cent in 2022 and 2.7 per cent in 2023, with a downward 0.2-percentage-point revision for 2023 from the July forecast, according to the latest World Economic Outlook (WEO) report.

The global economy is experiencing “a number of turbulent challenges”, as inflation higher than seen in several decades, tightening financial conditions in most regions, Russia-Ukraine conflict, and the lingering Covid-19 pandemic all weigh heavily on the outlook, Xinhua news agency reported, citing the report.

“This is the weakest growth profile since 2001 except for the global financial crisis and the acute phase of the Covid-19 pandemic and reflects significant slowdowns for the largest economies,” the report noted.

A contraction in real gross domestic product (GDP) lasting for at least two consecutive quarters (which some economists refer to as a “technical recession”) is seen at some point during 2022-2023 in about 43 percent of economies, amounting to more than one-third of world GDP, according to the report.

Noting that risks to the outlook remain unusually large and to the downside, the latest WEO report said that monetary policy could miscalculate the right stance to reduce inflation, more energy and food price shocks might cause inflation to persist for longer, and global tightening in financing conditions could trigger widespread emerging market debt distress.

“The balance of risks is tilted firmly to the downside, with about a 25 per cent chance of one-year-ahead global growth falling below 2.0 per cent — in the 10th percentile of global growth outturns since 1970,” the report noted.

The IMF argued that front-loaded and aggressive monetary tightening is “critical” to avoid inflation de-anchoring.

Noting that fiscal policy’s priority is the protection of vulnerable groups through targeted near-term support to alleviate the burden of the cost- of-living crisis felt across the globe, the IMF said the overall stance of fiscal policy should remain “sufficiently tight” to keep monetary policy on target.