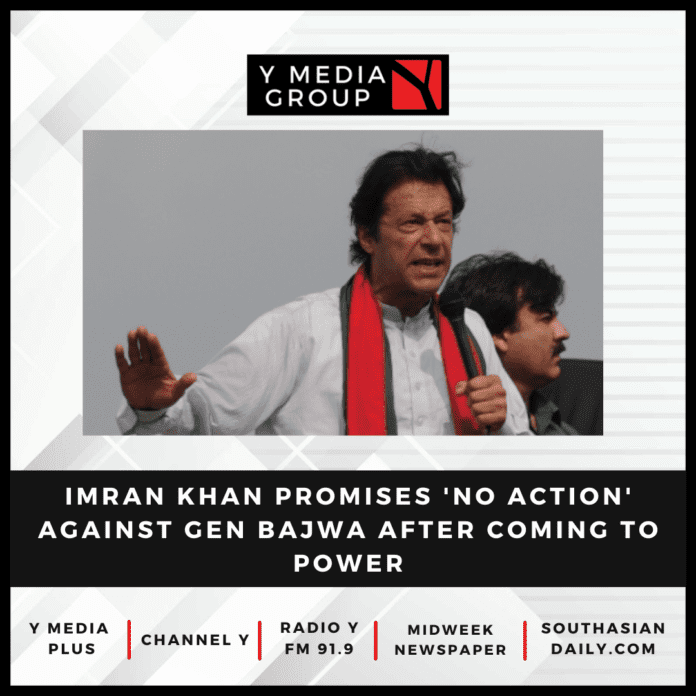 Pakistan Tehreek-e-Insaf (PTI) Chairman and former Prime Minister
Imran Khan on Sunday said that he has a “personal” dispute with former army chief, Gen Qamar Javed Bajwa (retd) but he will not take any action against him if he comes into power again, media reports said.

Imran Khan said that new Chief of Army Staff (COAS) General Asim Munir himself has said that he will remain neutral. However, he added that holding elections within three months after the dissolution of assemblies will the biggest test of his neutrality.

He said that when Lt Gen Faiz Hameed was removed as DG ISI, it became obvious that a plan has been hatched to topple the PTI government. “I told Gen Bajwa that if the plan to topple the government succeeds, no one will be able to manage the country’s
economy,” he added, Express Tribune reported.

The former Prime Minister said that he asked the then army chief how Shehbaz Sharif could be considered for the Prime Minister’s post as he was named in Rs16 billion worth of corruption cases. However, he added, he later came to know that corruption was not an issue for Gen Bajwa.

“Gen Bajwa used to say that Aleem Khan should be made the (Punjab) Chief Minister. I found out about his illegal possessions so I said how he can be made Chief Minister,” he said, Express Tribune reported.

Imran Khan said that Pakistan’s economy would have performed even better if there wasn’t a coronavirus pandemic and China was not locked down for two years.

Economy of the country is on a decline and income of people is low, then how can loans be returned in this situation, he questioned. “A country cannot prosper if there is no rule of law,” he added.

“I told Gen Bajwa that if we catch 10 to 12 top corrupt people, everything will get back on right track.”

Imran Khan said that National Accountability Bureau (NAB) was formed in 1999 but it should be questioned whether corruption increased or decreased since then.

“We had a decent relation with Gen Bajwa but I don’t know what happened later.”