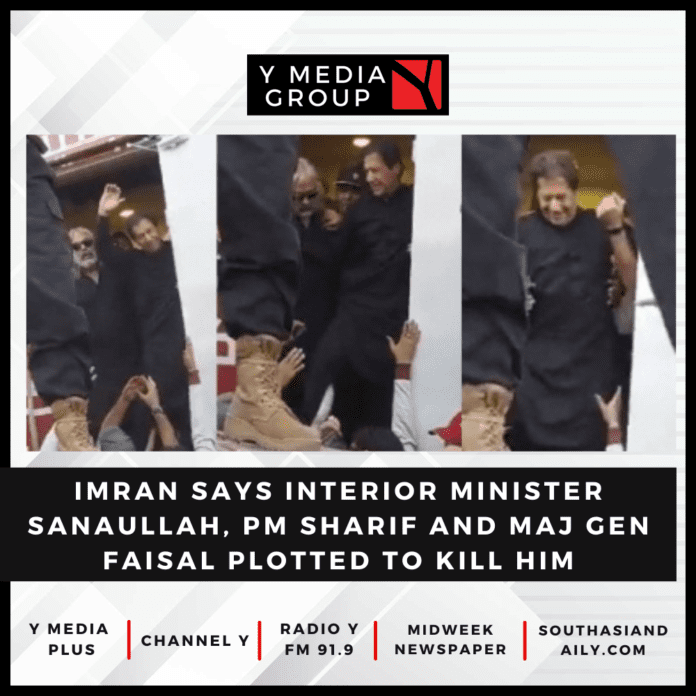 The former premier said that three others, separate from the ones he had named in a tape stashed abroad, had plotted to kill him, Dawn reported.

“How did I find out? Insiders told me. The day before Wazirabad, they made the plan to kill me as they saw the number of people increasing using the script of religious extremism.”

Khan has alleged that the “government and its handlers” had planned to get him murdered in the same way former Punjab Governor Salman Taseer was killed, Dawn reported.

“Firstly, they accused me of blasphemy, they made tapes and released them and PMLN projected it, I knew who was doing it. It is very easy to find out because this is a digital world. So, first it was projected that I disrespected religion and then their plan was what they did in Wazirabad… that a religious extremist killed Imran Khan,” the PTI chief claimed, Dawn reported.

Khan said that he had already narrated this plan to the public during a September 24 rally.

“This [the attempted assassination] happened exactly according to the script,” he said.

Earlier on Friday, Khan had claimed that four people plotted to kill him, stating that the “handlers” were taking the decisions at the back but the people were turning out to his rallies in record numbers, Dawn reported.

“Four people plotted to kill me. I made a video and named those people and have stashed it abroad,” Khan said, adding that it would be released in case something happens.

He indicated that he received the information of this plot through the relationships he had formed while in power.

In his first address since the assassination attempt on him in Gujranwala on Thursday, in which Khan sustained bullet injuries in his leg, the PTI chief stated that he was aware of the plot to kill him.

“I’ll come to the details of the attack later. I got to know the day before [the attack] that either in Wazirabad of Gujrat, they planned to kill me,” he said, Dawn reported.

The former Prime Minister said that Pakistan’s own agencies were not allowing democratic processes to continue.

“During the by-elections in July, all the state machinery was used, rigging was done, but PTI swept the elections. What happened next was that more pressure and threats were given. A handler came to Islamabad — Major General Faisal — and he said that he will show how to straighten them [PTI] out,” Khan alleged, Dawn reported.

“More strictness started on media and journalists favouring PTI. Our MPAs were approached, scared and threatened to abandon me… they threatened to release inappropriate videos and blackmailed them.”

Khan said that his party wasn’t “made by the establishment” like the PPP and the PML-N, asserting that he came to power with the people’s support, Dawn reported.

“The way the people supported me, I was surprised… we announced a long march on May 25. They staged three marches during our tenure. We thought the law and Constitution permitted us [to stage a protest].

“We thought they would give us permission because we have given them permission, he said. But instead they subjected our workers and leaders to violence.

“They shelled families in Islamabad… they thought the party would end but they didn’t understand the [sentiments of the] nation because when decisions are made in closed rooms, you don’t know what is happening,” Khan said.