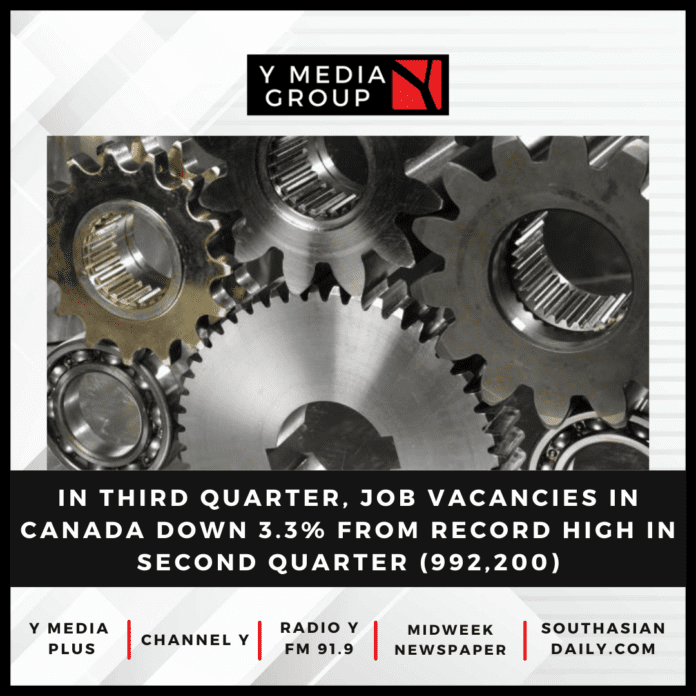 The job vacancy rate—which corresponds to the number of vacant positions as a proportion of total labour demand (the sum of filled and vacant positions)—was 5.4% in the third quarter of 2022, down from 5.7% in the second quarter. It was up from 3.3% in the first quarter of 2020 at the onset of the COVID-19 pandemic.

Changes in job vacancy levels and rates differ across provinces

In professional, scientific and technical services, job vacancies declined 15.4% from the record high reached in the second quarter to 63,100 in the third quarter. This was the first decline in the sector since the fourth quarter of 2020.

On a quarter-over-quarter basis, job vacancies rose in the third quarter for registered nurses and registered psychiatric nurses (+17.0% to 27,600); nurse aides, orderlies and patient service associates (+37.5% to 26,200); and licensed practical nurses (+20.7% to 13,100). Together, these occupations made up the majority (69.2%) of all vacancies in health occupations in the third quarter (not seasonally adjusted).

Infographic 2
Job vacancy increase tapers off in many sectors

Faced with a tight labour market and hiring difficulties, some employers respond by raising the offered wages of their vacancies. Compared with the same quarter a year earlier, the average offered hourly wage increased by 7.5% to $24.20 in the third quarter. In comparison, average hourly wages of all employees (measured in the Labour Force Survey) rose 5.3% over the same period (data used in this section is not seasonally adjusted).

Part of this increase was due to a shift in the relative composition of job vacancies from lower-offered-wage to higher-offered-wage occupations. Using a method that holds the composition of job vacancies by occupation at the average of the third quarter of 2021, year-over-year offered wage growth would have been 5.5% in the third quarter of 2022.

On a year-over-year basis, the increase in average offered hourly wage in the third quarter matched or exceeded the national average (+7.5%) in 10 of the 40 broad national occupational classification groups, representing 25.4% of total vacancies. Broad occupations with notably higher than the average increases in offered wages included middle management occupations in trades, transportation, production and utilities (+10.8% to $41.40); assisting occupations in support of health services (+10.7% to $22.45); assemblers in manufacturing (+10.4% to $20.05); and processing and manufacturing machine operators and related production workers (+10.2% to $20.20). In contrast, care providers and educational, legal and public protection support occupations (+2.5% to $19.80); office support occupations (+3.1% to $21.20); and harvesting and landscaping and natural resources labourers (+3.8% to $19.85) recorded the lowest growth rates in offered wages.