IND vs BAN, 2nd Test: ‘The scientist did it’, says Sehwag as former India stars praise Ashwin for his batting 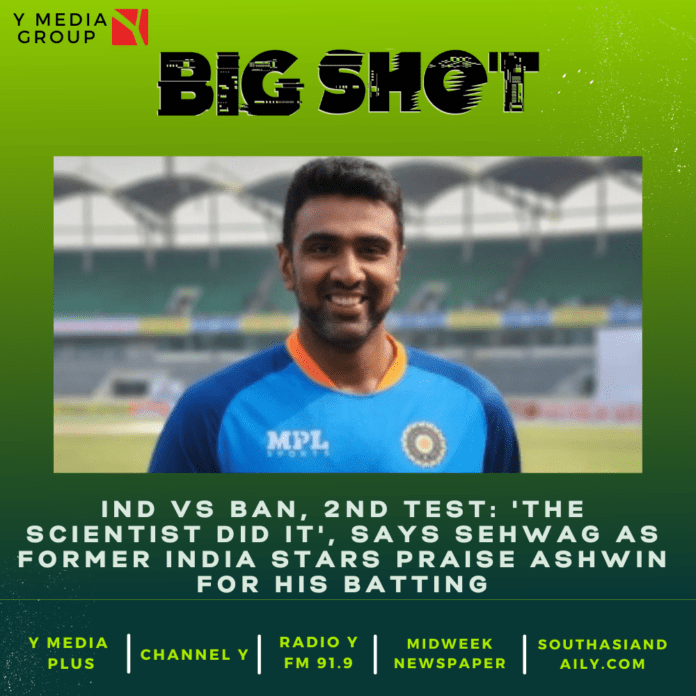 Off-spinner R. Ashwin on Sunday came in for praise from batting legends Sachin Tendulkar and Virender Sehwag for his crucial role in helping India beat Bangladesh by three wickets in the second Test at Mirpur, Dhaka and seal a 2-0 sweep in the series.

Ashwin came up with a superb all-round show in the match, claiming six wickets (4-71 & 2-68) in the match and scoring a total of 54 runs in the two innings, an unbeaten 42 runs in the second innings leading India to victory.

The veteran off-spinner and Shreyas Iyer raised 71 runs in their unbeaten stand for the eighth wicket in India’s second innings that rescued the visitors from a precarious 74/7 while chasing a tantalising target of 145. Iyer was not out on 29 while Ashwin scored a fine 42 off 62 deliveries as India escaped from a risky position to win the match and series.

Tendulkar praised both Shreyas Iyer and Ravichandran Ashwin for their superb batting.

“Congratulations #TeamIndia on winning the series. Bangladesh spinners put India in a spot but @ashwinravi99 & @ShreyasIyer15 batted really well to take India to victory!” Tendulkar wrote in his tweet.

Sehwag was more effusive in his praise for Ashwin calling him a “scientist” for the way the all-rounder from Tamil Nadu batted on Sunday.

“The scientist did it. Somehow got this one. Brilliant innings from Ashwin and a wonderful partnership with Shreyas Iyer,” Sehwag said in his tweet which was accompanied by a morphed photograph of Ashwin, in a white lab coat, conducting a scientific procedure pouring some chemical with a pipette into a test tube.

Former India opener Wasim Jaffer and Irfan Pathan too praised Ashwin for his contribution in the match that led to India’s victory.

Jaffer praised Shreyas Iyer and Axar Patel for their batting in India’s second innings of the second Tes.

“These knocks of 42*, 29*, and 34 by @ashwinravi99, @ShreyasIyer15, and @akshar2026 might be small in number, but they’re huge in stature! Congratulations India on winning the series (Clapping hands emoji) Well played to Bangladesh too, gave India proper scare! #BANvIND,” said Jaffer in his tweet.

Dinesh Karthik called Iyer and Ashwin’s efforts as “outstanding batting under pressure” and noted that the team has moved one step closer to the World Test Championship final.

“Outstanding batting under pressure by @ashwinravi99 and @ShreyasIyer15. Pure class. Well done Team India! Need to have more of such hard-fought games to keep this format ticking. One step closer to the World Test Championship finals!,” he wrote in his tweet.