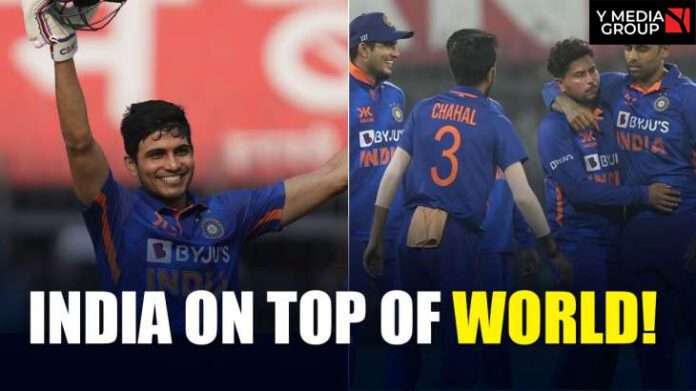 IND vs NZ 3rd ODI: India had earlier defeated New Zealand in the first two ODIs. They have now defeated the Kiwis by 90 runs in the third ODI in Indore.

IND vs NZ 3rd ODI: The Indian Cricket team on Tuesday thumped the New Zealand side in the 3rd ODI by 90 runs to clean sweep the series by 3-0. With this win, the Indian team has become the new No.1 ODI team in the world as they have gone past England, who now stand on second. Meanwhile, New Zealand are pushed to fourth.

Batting first, India posted a decent total of 385 as Rohit Sharma and Shubman Gill scored their centuries. In reply, New Zealand were all out for 295 in 41.2 overs with Devon Conway scoring a 100-ball 138. Conway inflicted life in the match and kept his team in the hunt. While Rohit hit 101 off 85 balls, Gill scored a 78-ball 112, after the visitors asked India to bat at the Holkar Cricket Stadium.

Virat Kohli chipped in with 36 off 27 balls after the opening duo added 212 runs in 26.1 overs. Later, Hardik Pandya smashed a 38-ball 54 to power India. In the bowling India started well as Pandya got Allen. However, Conway and Nicholls batted well, before the later departed. When New Zealand were proving hot for India, Shardul came and took three wickets in his two overs, sending Mitchell, Latham and Phillips back. When Umran got Conway and Kuldeep sent back Bracewell, it became a formality as India drew curtains.

Notably, this is the third time that India have clean-swept New Zealand in an ODI series. The first of them came in 1988-89 when India defeated Kiwis by 4-0 in India. The second such occasion came in 2010 when India won by 5-0, that too in India.

For turning the match in the later part of the second innings, Shardul Thakur has adjudged as Player of the match. He took three wickets to send shockwaves in the New Zealand camp. Meanwhile, Shubman Gill is named the player of the series with 360 runs in the innings, including 2 hundred.