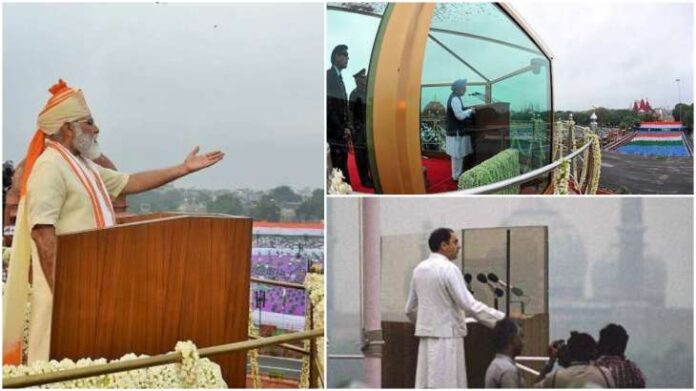 Independence day 2022: Prime Minister Narendra Modi has brought his signature style, perhaps for better, to the conventional Independence Day celebrations from the ramparts of the majestic Mughal-era monument, Red Fort, in New Delhi.

PM Modi has always diverted from the set security protocols. Every year, he moves out of his security cordon to greet children after delivering his speech from the ramparts of the historic monument on Independence day.

Will PM Modi opt for a bullet-proof enclosure this year?

Another noticeable change is the prime minister doing away with the bullet-proof enclosures. PM Modi chooses to deliver his Independence Day address from an open-air podium instead of from behind bulletproof glass. However, this year may be a little different. According to a PTI photo released on August 11, workers were seen preparing a bullet-resistant enclosure at the Red Fort. This has raised several eyebrows because if it happens this will be unprecedented since Modi assumed the office of prime minister.

Image Source : PTIWorkers are seen preparing a bullet-resistant enclosure at the Red Fort ahead of Independence Day celebrations, in New Delhi, Thursday, August 11, 2022.

Overruling strong objections from his security detail, Modi had shunned the bullet-proof enclosure to connect directly with people during his maiden Independence Day speech as PM from the ramparts of the iconic Red Fort in 2014. He had decided to opt-out of the enclosure since then.

Why bullet-proof glass for PMs

After former prime minister Indira Gandhi’s assassination, the bullet-proof glass had become a tradition and all Prime Ministers since then had addressed the nation from behind the glass. The bullet-resistant enclosure first came up on Republic Day in 1985 when Rajiv Gandhi was the Prime Minister. It became a permanent fixture until VP Singh opted for a half enclosure for the Independence Day in 1990. The screen was raised body-high again the next year for PM PV Narasimha Rao.