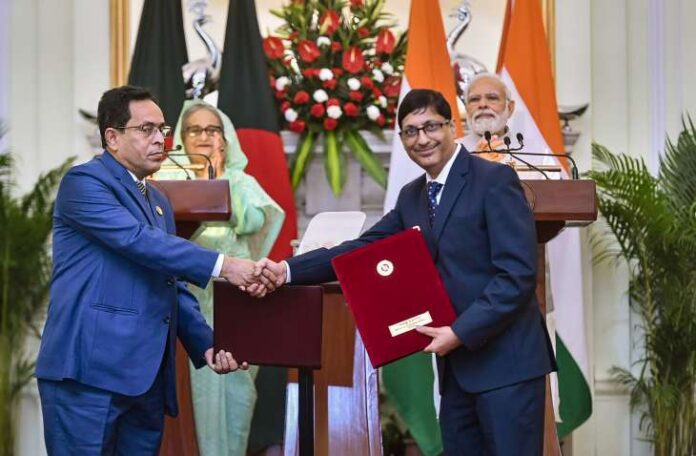 India and Bangladesh on Tuesday signed an interim water sharing agreement for Kushiyara river, the first such pact since the signing of the Ganga water treaty in 1996.

Bangladesh Prime Minister Sheikh Hasina noted that India and Bangladesh share 54 rivers and sought early conclusion of the Teesta water sharing agreement, which has been hanging fire for more than a decade due to opposition from West Bengal Chief Minister Mamata Banerjee.

India and Bangladesh signed a memorandum of understanding on sharing of waters of Kushiyara river, a pact that will benefit people residing in southern Assam and the Sylhet division of Bangladesh.

“Today, we have signed an important agreement on sharing water of the Kushiyara river. This will benefit southern Assam in India and Sylhet region in Bangladesh,” Modi told reporters after the talks with Hasina.

He said there were 54 rivers that pass through the Indo-Bangladesh border, and have been linked to the livelihood of the people of the two countries for centuries.

“These rivers, folk tales about them, folk songs, have also been witness to our shared cultural heritage,” Modi said.

Hasina shared the sentiments expressed by Modi and also stressed on the need to have water-sharing agreements for other rivers as well.