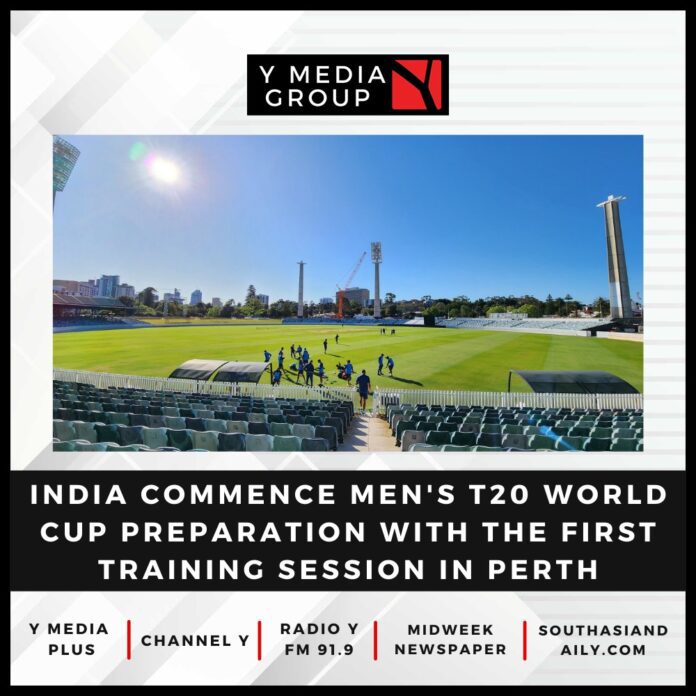 A day after arriving in Australia, the Indian team commenced its preparation for the Men’s T20 World Cup with their first training session at the WACA Stadium in Perth on Friday.

The Rohit Sharma-led side landed in Australia after departing from Mumbai in the early hours of Thursday without their 15th player in the squad as the replacement for injured pace spearhead Jasprit Bumrah is yet to be announced.

The Board of Control for Cricket in India (BCCI) shared a photo of Indian players and support staff looking to begin their training session with the sun shining at its brightest. “Hello and welcome to WACA. #TeamIndia are here for their first training session,” wrote the BCCI on their social media accounts.

After the end of the T20I series against South Africa at home, which India won 2-1, head coach Rahul Dravid had explained that the team being based in Perth for a week will help them in adapting to the pace and bounce offered by the pitches in Australia, especially with nearly half of the side not having played a T20 game in the country before.

“We will get an opportunity to spend a few days and sessions in Perth and then have a couple of matches there. Australia is quite unique in terms of the pace and bounce on those wickets and a lot of our players have not played a lot of T20 cricket in Australia.”

“The idea was to give ourselves a chance to practice a little bit more, get acclimatised (to the conditions) and get some game time into practice. Having been to Australia before (in his playing days), it takes some time to get used to that pace and bounce and hopefully, once we practice, we would be able to have discussions around the sessions, strategies and tactics of how we need to play.”

India, the inaugural Men’s T20 World Cup winners in 2007, are in Group 2 of the Super 12 stage at T20 World Cup, alongside Pakistan, Bangladesh, South Africa and two qualifying sides from the first round of the tournament.

They will open their T20 World Cup campaign against arch-rivals Pakistan on October 23 at the Melbourne Cricket Ground (MCG), followed by matches on October 27 (against the first qualifier side at SCG), October 30 (against South Africa at Perth Stadium), November 2 (against Bangladesh at Adelaide Oval) and November 6 (against second qualifier side at MCG).