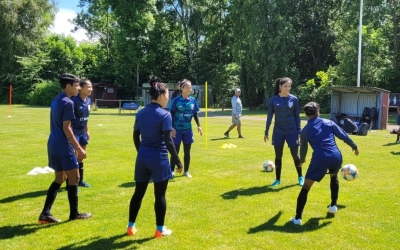 India under-23 women’s football team will take on the United States in the WU23 3-Nations Tournament in Larods IP, Sweden on Saturday (June 25), hoping to do better than their first match in the event.

The Indian team had played the first of its two matches against Sweden in the 3-Nations tournament, in which they lost 1-0.

But a day before taking on USA under-23, India head coach Suren Chettri believes that the girls will score and win the match, their last encounter in the tournament.

“If we want to win, we need to score,” coach Chettri mentioned ahead of the game.

Even though the players were disappointed after the loss in their last match against Sweden, Chettri sounded optimistic.

“We will play the way we played against Sweden and focus on attacking more this time.”

“It was sad to lose the last game but the girls had put up their best effort against the number 2 in World FIFA ranking. We played a really good defending game, whatever skills we had we tried to show on the pitch and we will be doing the same tomorrow,” he maintained.

One of the players who stood firmed all over 90 minutes into the game but conceded an injury-time goal was Blue Tigresses goalkeeper Aditi Chauhan.

“Aditi is an experienced player and she played a mature game last day. I would say she had put up all the effort for the team but unfortunately, we lost,” Chettri stated about Aditi’s performance.

Aditi also believes in coming back stronger on Saturday as she said, “There are a lot of positives from the last game and the team is motivated to come back even stronger against the USA.

“It was disappointing to concede in the last moment but everyone gave their best effort and I am proud of the girls. We understand the difference between the ranking and standard of the play, and hopefully, we will continue to perform well tomorrow as well,” Aditi said.

Speaking about her own performance against Sweden, she said, “I am really happy with my performance, and the game against Sweden was probably my best game so far. As a senior player, this is a kind of performance you expect from yourself. I am happy that I could contribute to my team against a tough opponent.”