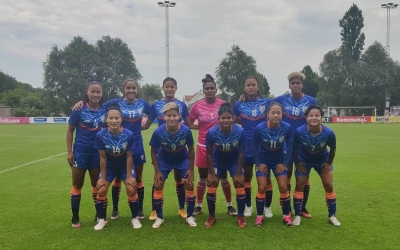 The Indian women’s team went down 1-4 against the USA U-23 in their last encounter of the WU23 3-Nations tournament played at the Larods IP, Helsingborg in Sweden on Saturday.

India created a flurry of chances and took the lead in the 8th minute, but the opponents picked up the win in the end, drawing level in the first half, before scoring three more on the other side of the lemon break.

The first half began with a bang for the Indian side as Pyari Xaxa found the back of the net in the 8th minute as she pulled the trigger from long range after being fed the ball by Manisha Kalyan.

However, the lead did not last long as Messiah Bright equalised about a minute later for USA.

As the match opened up, both sides created chances as Indian custodian Aditi Chauhan was forced into a sharp save 13 minutes into the game. Megan Bornkamp flicked a header inside the box and Aditi collected it easily.

India went on to an attacking mode as Manisha and Pyari created the most chances for their side. The two teams headed into the break with a 1-1 scoreline.

The second half began with USA doubling the lead from Jenna Nighswonger’s free-kick.

Minutes later, there were two consecutive attempts on goal from Manisha and Dangmei Grace, but both missed the target.

Head Coach Suren Chettri made the first change for India as Soumya Guguloth came on in place of Ratanbala Devi.

It was a memorable day for Dular Marandi, who took to the field for the first time in National Team colours, replacing Manisha in the 62nd minute.

As the game proceeded, Soumya almost grabbed India’s second as her header from Ashalata’s free-kick went past the frame of the goal.

Coach Chettri made the last change in the 78th minute as Karthika Angamuthu and Apurna Narzary came on in place of Martina Thokchom and Anju Tamang, respectively.

However, in the 74th minute, USA added a third to extend their lead from Sierra Enge’s shot and substitute Ava Cook scored another five minutes from time as the scoreline read 4-1 in favour of the USA in the end.