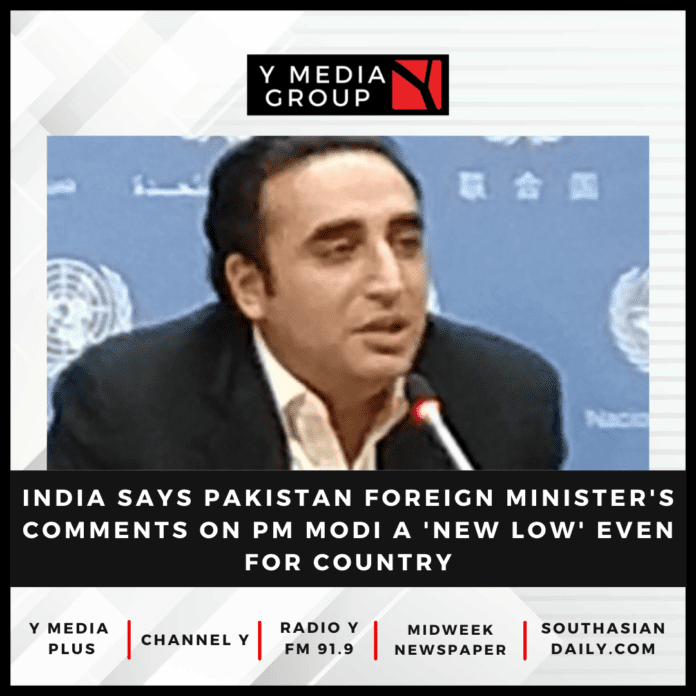 India on Friday strongly reacted to Pakistan Foreign Minister Bilawal Bhutto Zardari’s personal attack on Prime Minister Narendra Modi, saying that it was a “new low” even for that country.

A statement issued by the Ministry of External Affairs over Bhutto’s remarks in New York, it said that the Pakistan Foreign Minister’s “frustration” would be better directed towards the masterminds of terrorist enterprises in his own country, who have made terrorism a part of their “state policy”.

The comments by Pakistan’s Foreign Minister incidentally came on a day when the country is observing Vijay Diwas, the day when India defeated Pakistan in Bangladesh war on December 16, 1971.

“These comments are a new low, even for Pakistan. The Foreign Minister of Pakistan has obviously forgotten this day in 1971, which was a direct result of the genocide unleashed by Pakistani rulers against ethnic Bengalis and Hindus. Unfortunately, Pakistan does not seem to have changed much in the treatment of its minorities. It certainly lacks credentials to cast aspersions at India,” the statement said.

“Pakistan Foreign Minister’s frustration would be better directed towards the masterminds of terrorist enterprises in his own country, who have made terrorism a part of their state policy. Pakistan needs to change its own mindset or remain a pariah,” it added.

“As recent conferences and events have demonstrated, counter terrorism remains high on the global agenda. Pakistan’s indisputable role in sponsoring, harbouring, and actively financing terrorist and terrorist organisations remains under the scanner. Pakistan Foreign Minister’s uncivilised outburst seems to be a result of Pakistan’s increasing inability to use terrorists and their proxies,” the MEA said.

Cities like New York, Mumbai, Pulwama, Pathankot and London are among the many that bear the scars of Pakistan-sponsored, supported and instigated terrorism. This violence has emanated from their Special Terrorist Zones and exported to all parts of the world. “Make in Pakistan” terrorism has to stop, it added.