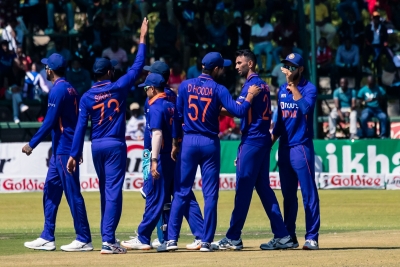 With this win, India also take an unassailable 2-0 lead in the three-match series, with Monday’s match becoming a dead rubber. The five-wicket victory also means that this was India’s 14th win on the trot over Zimbabwe in ODI cricket.

After Thakur’s 3-38 in seven overs and the rest of the bowlers took a wicket each to bowl Zimbabwe out for just 161 in 38.1 overs, the visitors were in some discomfort at 97-4 in their chase of 167. But Samson, who hit three fours and four sixes in his unbeaten 43 off 39 balls and Deepak Hooda (25, including three fours) shared a 56-run stand to get the match in India’s favour with 146 balls remaining.

K.L. Rahul’s promotion as opener backfired as he was trapped plumb lbw while attempting to flick off Victor Nyauchi. Shikhar Dhawan was aggressive and used his feet well to hit four good-looking boundaries. But he was undone by a well-directed bouncer from Tanaka Chivanga as he pulled but it got big on him and skied to square leg.

Ishan Kishan chopped onto his stumps off Luke Jongwe to depart cheaply. But Shubman Gill, batting at three, was at his classy best, bringing out his signature short-arm jab while oozing class with his off-side boundaries and driving straight down the ground with the full face of the bat. Gill’s promising knock ended at 33 when he got a top-edge on a slash straight to deep third man.

From 97-4 in 14 overs, Hooda and Samson joined forces to take India over the line. Samson brought up India’s hundred by driving in the gap between cover and mid-off off Jongwe while Hooda ramped a short ball over the keeper for another boundary in the 16th over.

Samson was in his element, smoking Chivanga down the ground for a boundary before slamming Sikandar Raza in the next over through the same region for another four and followed it up by dispatching over long-on for six. After Hooda hit Brad Evans for a boundary through cover, Samson used his feet to smack back-to-back sixes off Sean Williams in the 23rd over.

On Williams’ slower ball, Samson danced down the pitch to smash down the ground. On the very next ball, Williams dropped short and Samson pulled flat over fine leg for another six. Though Hooda was castled by a yorker from Raza to end the 56-run partnership for the fifth wicket, Samson finished off the chase in style with a huge six over long-on to seal the match and series in India’s favour.

Earlier, pushed into batting first, the opening pair of Takudzwanashe Kaitano and Innocent Kaia were cautious against the new ball, especially with Mohammed Siraj getting the ball to swing away beautifully.

Siraj got the first breakthrough when he shaped the ball away to square up Kaitano. The batter had no other option but to nick behind, and Samson dived full length to his left to complete a one-handed stunning catch.

Thakur’s short ball down leg beat Innocent Kaia for pace and he gloved behind to Samson. He had his second wicket in the 12th over when captain Regis Chakabva, who promoted himself in the batting order, was undone by extra bounce and nicked to second slip.

Zimbabwe’s troubles increased when Wesley Madhevere tried to defend, but nicked behind off Prasidh Krishna as the hosts’ lost their top four batters for just 11 runs. Their in-form batter Raza cut straight to backward point off Kuldeep Yadav as Zimbabwe lost half of their side for 72 runs.

Williams tried to counter-attack with three boundaries and a six. But in a bid to go big, he slogged straight into the hands of the deep square leg off Hooda. Thakur, coming into the eleven in place of Deepak Chahar, struck again as he shattered Jongwe’s stumps while Patel got his first wicket with Evans chopping onto his stumps.

Burl used a mix of luck and some mighty shots to fetch boundaries and push Zimbabwe’s score past 150. But he ran out of support from the other end as Nyauchi and Chivanga were out in quick succession, summing up Zimbabwe’s day with the bat.