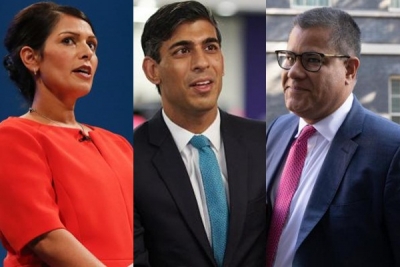 With voting scheduled for between 10.30 p.m. and 12.30 a.m. (IST) on Monday, how will Indian origin MPs in Britain’s ruling Conservative party cast their ballots in a no confidence motion against Prime Minister Boris Johnson?

The vote was triggered after more than 15 per cent of Conservative MPs expressed a lack of support for Johnson – which is the minimum requirement for such a test of opinion to take place. With the current strength of the party being 359 in the House of Commons, 180 MPs have to oppose the Prime Minister to depose him.

Johnson is accused of being a serial liar. He is charged with misleading Parliament on parties and socialising that took place at his office-cum-residence in Downing Street in violation of laws enacted against such practices during the Covid-19 lockdowns. Last but not the least, he is now perceived to be an electoral liability likely to cause disastrous consequences to his party.

The Conservatives are forecast to lose two by-elections to the Commons later this month in constituencies hitherto held by them. Their prospects in a general election which must take place by 2024 do not appear to be any better at present with Johnson at the helm.

Tobias Ellwood, an MP in the Conservative heartland of southeast England, claimed his party would lose 90 seats based on current public opinion. This would return the Labour Party to power either on its own or heading a coalition.

There are seven odd Indian origin Conservative lawmakers in the Commons, of which four are cabinet ministers.

It is taken for granted that Priti Patel, the Home Secretary, is a Johnson loyalist and likely to back him. The same is assessed to be true of Suella Braverman, who is the Attorney General.

Rishi Sunak, the Chancellor of the Exchequer, and Alok Sharma, Minister at the Cabinet Office, are the others. “@BorisJohnson has my full support,” Sharma tweeted.

The process at hand is a secret ballot. Therefore an MPs preference will be unknown. In the early months of this year, Sunak was seen as a contender to succeed Johnson. But his popularity has plummeted since because of the cost of living crisis in Britain and the scandal over his Indian wife paying lower taxes in India instead of submitting to higher rates in Britain, thereby denying revenue to the UK in a situation in which her husband is responsible for the government’s income.

Sunak tweeted on Monday morning: “I am backing him today and will continue to back him.”

The longest serving MP of Indian descent Shailesh Vara has been prominent among MPs arguing for Johnson’s continuance as Prime Minister.

Another, Gagan Mohindra posted on Twitter: “I will be suppporting Boris in tonight’s vote.”

The MPs demanding a vote crossed the 15 per cent threshold some time in the past week when parliament was in recess. But Sir Graham Brady, the senior backbench MP who chairs what is known as the ‘1922 Committee’ which conducts the balloting, avoided spoiling the 4-day platinum jubilee celebrations of the British monarch Queen Elizabeth’s reign, which concluded on Sunday.

With parliament back in session on Monday, Brady immediately announced the vote. Thus Johnson’s fate will be decided before the night is out.

If he loses then a procedure for a contest among MPs will begin, which could consume at least a couple of months. Johnson during this period will effectively become a lame duck leader.

But if he wins Monday night’s vote, no challenge to his leadership can take place for another year, thus giving him breathing space and time to repair his position.

Of course, Johnson could win the vote and then decide the tide is running against him and so resign.